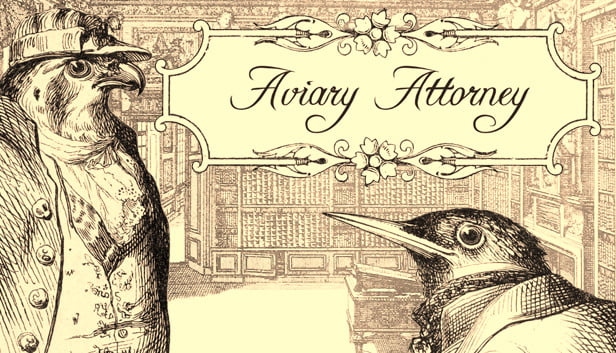 Despite finding at least a baseline level of enjoyment in every investigative game I’ve played, I’m yet to make the plunge into the “Ace Attorney” series, often touted as the cream of the crop for its niche segment of the market. “Aviary Attorney” is yet another installment in said niche and delightfully mixes unique imagery with amusing dialogue to further push me towards the genre titan I’ve postponed for so long.

It’s hard not to find even a remote level of appreciation for the game, from just the surface alone. Utilising the whimsical imagery of J.J. Grandville and majestic melodies of Saint-Saëns, “Aviary Attorney” is an audio/visual treat, an exemplary use of public domain media, managing to convey more serious themes without sacrificing the overtly comedic tone the game achieves through it’s witty writing.

And the game gets a lot of opportunities to flaunt said writing. With a core gameplay loop consisting of finding clues, interviewing witnesses and constructing a defence case, the game’s slow, purposefully methodical pace allows characters the room to breathe and grow without holding themselves hostage to the speed of the gameplay. In an unrelenting Threepwood-esque style, main characters JayJay Falcon and Sparrowson deny the player a moment’s rest, relaying both minor and major information on your detective travels. That’s not a bad thing either. Split into four acts, the first two focus intently on the investigation style gameplay, exploring new items, locations and characters in a constant flow allows for the writing to shine. Falcon and Sparrowson’s relationship is easily the most engaging part of the game, employing the former as the straight man to the latter’s immature, bumbling self. It’s also a testament to how well defined the characters are. Jokes often play off of previously developed traits the characters exhibit or plot beats, notably Sparrowson’s infinite craving for food and lack of nuance in his profession. Instead of simply saying funny things, there is setup and a payoff to a lot of the comedy the game attempts.

Outside of the writing however, acts one and two also prove to be solidly made attorney/detective games, something you will probably hope for in a game titled “Aviary Attorney”. I wouldn’t call it deep, but the meat of the gameplay isn’t overly simple either. Streamlined to a point where the writing can take over would be apt, much of the pre-trial sections feel scripted, as if you were always going to find certain clues and talk to certain people no matter what choices you make. In that regard, the resource management part to the game – or more specifically how you spend your limited time – takes a backseat to the characters and story. During the trial however you have several more obvious chances to make an error. In the courtroom, your main job as the defendant is to cross examine witness testimonies, using the evidence you found prior to strengthen your case and sway the jury. In my experience, I essentially had all the evidence handed to me on a platter, therefore the real challenge is finding where the inconsistencies lie in the witnesses statements. Overall it has a relatively moderate difficulty, giving you enough information to make potential links but not being so obvious it’s a chore. It makes for a compelling experience, and again the sharp dialogue gets time to shine, exaggerated by punchy, overly dramatic sound effects mostly used for comedic effect in the vein of a stage play.

Where the game falters however is in the latter half. Act three and act four possess different issues, but overall make for a disjointed product on the whole. Firstly act three, which plays more like a rudimentary point & click title rather than the detective simulation of the first two. For the most part the core charm still emanates through, although the game quite brutally flips the switch on the defined narrative formula, focusing on the overarching political revolt story, which was previously handled with more “tact and finesse” in the words of our feathered Sherlock Holmes.

One of the reasons I found the presentation style so effective was how is managed to subdue a lot of the menacing themes going on behind the curtains. Murder, treason, perjury, all prevalent throughout the first two acts but the novelty of the anthropomorphic animal world set a much more serene tone. Using public domain music – a lot of which recognisable even to a classical pleb like me – gives off the impression it should be viewed as more of a pantomime than something profoundly serious. This isn’t to say addressing mature themes was at all a bad choice, rather the decision to ditch the well established tone and instead going all in was.

Act three, while not as egregious as the game’s finale, definitely shows early signs of this change, winding down the comical aspects in favour of a more traditional plot only dampens “Aviary Attorney’s” key draw. Additionally it’s made worse by the lack of genuine detective work going on here, especially given the whole catalyst for the act’s plot line was your employment as a private investigator. Helping pay off Sparrowson’s medical debts by becoming a debt collector has its moments, but the lack of mechanical complexity in the actual gameplay makes it feel more like a vapid visual novel than what it achieves beforehand.

While act three was on the whole an enjoyable experience, act four drops the ball hard through heavy handed social commentary and terribly rushed pacing. In fact, the latter was so jarring to me that I wasn’t surprised at all to learn that upon release, the game’s final chapter wasn’t even shipped; it took a few extra days for that portion of the game to become available. Similar to act three, the narrative closely follows the French revolution, but lacks the time to establish characters and events. Much of the revolutions events happen so fast that you don’t get time to dwell on your actions, and the obvious nature to the points the game is trying to make on justice and equality softens make any emotional impact it might have.

The result is a blurring of the political spectrum, a tale of how anger-infused passion can sway good hearted causes on the wrong path, but in relation to the full game it’s a weird moral takeaway. The twist at the end of act one – or at least the twist for me, given I won the court case which is technically failable – is that despite my desire and good intentions to save an innocent, I walked into the tricks of corruption, letting a literal affluent fat cat walk away scot free. The protagonist JayJay is illustrates his shame and self-disgust clearly, and as a result I as a player was more wary of potential mistrust in the later acts. It’s a simple yet effective character arc, but attempting to apply that specific tale to a story that firstly didn’t need it, but additionally didn’t have the resources for it either comes off as a punch in the face for your efforts.

I’m not saying every tale needs a happy ending, but a somber one definitely needs a payoff. Act four was so disappointing to me because of how many missed opportunities there were to intersperse political messages in a more nuanced way, as the first half showed. Focus on JayJay and his adventures; humour hides the pain, and grim truths of political corruption and social immobility will speak louder. Acts one, two and sporadically three toed the line between a cute comedy fantasy and a bleak, realistic representation of our current society. Act four missed the line and walked in the opposite direction.