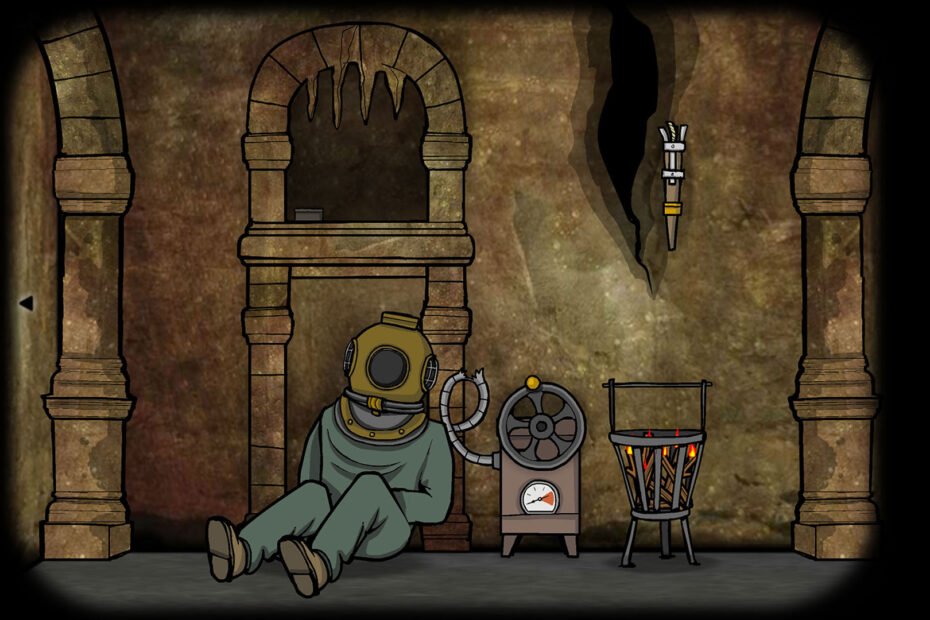 Escape the room games were so ubiquitous back in the Flash era of gaming that finding quality titles was challenging. Throw a random noun in front of “Room”, and that game likely exists. They were fucking everywhere. Crimson Room is a historical classic. Bars of Black and White is a personal favourite. Don’t Escape is a unique subversion of the genre. But how about Grandpa’s Pumpkin House? Or Swimming Pool Escape? Police Lockup Escape maybe? For all I know, these games could be absolutely cracking, but the sheer vastness to this genre makes picking one feel like choosing what to watch on Netflix. Don’t bother. Just put The Office on again.

The Cube Escape franchise released in 2015 with Cube Escape: The Lake, years and years after the aforementioned Flash-era boom. As a result, Cube Escape as an experience feels deceptively fresh; it’s very clearly still a room escape game, and in many ways still very clearly a Flash game, but factor in the decade long break we’ve had from the genre’s heyday and this feels new.

I say this because mechanically, Cube Escape feels very much limited by the constraints of Adobe Flash, and as a result doesn’t play notably different to many other room escape games. In The Lake for example, the gameplay consists of a rudimentary loop: assemble a fishing rod, find bait to fish with, use the bait and then use the item you acquire from fishing. Admittedly, it’s one of the most basic loops in the series, but it’s indicative of what to expect for the later games. Even in later entries like The Cave and The Theatre, a reoccurring “safe” puzzle transpires where you look for visual clues around the room to match up each part of the combination lock. Even the symbols used for each potential combination are reused, making them feel homogenous and uncreative.

That’s not to say Cube Escape as a whole is lacking creativity however, far from it in the case of its atmosphere and narrative, but even with its puzzles it can hit higher levels of complexity than other room escape games ever did, thought whether this is wholly successful is another question. Episodes like The Mill and Case 23 are definitely more involved, spanning several rooms with mechanics from one affecting those in another, but sometimes I felt overwhelmed and reduced to using the tried and tested “combine-everything-with-everything” method of puzzle solving, found in many point & clicks. In The Mill especially, one of the more deeper episodes in the collection, I found myself utterly stumped by the inane logic at hand, traversing several rooms with objects that didn’t seem useful to any of them. An old lady sitting in a cupboard in one, an attic with a cow in another, and I have a box of matches. What the fuck am I doing?

This frustration can partly be attributed to the eponymously names “Rusty Lake universe” and it’s devastatingly eerie, wonderous and perplexing rules. This right here is why the Cube Escape games are so beloved, a Twin Peaks-inspired world filled to the brim with investigative plotlines, uncanny valley imagery and engrossing lore. Personally, it does confuse me. I don’t have much of a penchant for media which is wholly abstract, and Cube Escape certainly is that. Logically, much of what you do makes no sense. Sure, matches igniting wood to make fire is a reasonable set of actions, but yanking a golden tooth out of an old lady’s mouth and chucking it on the bare flame to melt into the raw element to then use to make a key? Less obvious, quite weird, and completely in keeping with Rusty Lake’s world. Puzzles in these games frequently rely on a surreal mode of thinking, even more ridiculous than you’d be used to in other point & clicks, almost feeling like a real world representation of that one scene in The Secret of Monkey Island where Guybrush uses a staple remover on a “tremendous yak”, proclaiming he “must be nuts” seconds later.

I feel like that so often in a Cube Escape game. In Harvey’s Box for example, you play as the bird Harvey trying to escape a box as you’re being shipped to the famous Rusty Lake Resort. Puzzles consist of filling a glass with wine as to match the sound a pigeon is making just outside the box, arranging flies and larvae in a 6 by 6 grid as to ensure no three flies or larvae are touching in a row and, perhaps most strangely of all, playing a simple domino matching game. The puzzles in many Cube Escape games don’t feel thematically linked to the story at hand. Sure, maybe this is because the story is so cosmic and hazy, but I would have liked to see the puzzle represent some sort of meaning to the game’s plot. In The Cave for example, you traverse the Rusty Lake in a submarine, reclaiming several memories stuck in the lake. This does feel a part of the story, and as a result I feel like I understood the characters’ purposes far better than in other episodes like The Theatre, which has you act out an esoteric play which, in some way I suppose, is representative of what the Rusty Lake operation is all about, but due to the bizarre imagery I found myself more astounded by what I was actually doing to focus on picking up on any foreshadowing or symbolism, like in the case with a pipe puzzle where you guide where water drips to by changing the orientation of certain pipes. Onto a flower in a pot? Maybe, but how about directly into a fish’s gullet?

Despite the occasional disconnect between the gameplay and the story, the Rusty Lake universe is an incredibly potent and striking place, made even more impressive when you consider all the hurdles it has to jump as a Flash game. Many Flash games are defined by low quality assets, royalty free music and rigid, elementary gameplay. It’s weird then that the Cube Escape games exhibit all of these characteristics and still manages to forge the atmosphere it does. Visual blemishes, Kevin Macleod tunes and stiff puzzles run rampant in Cube Escape, yet it barely makes a mark on the pristinely grim nature of Rusty Lake. It’s consistently creepy, utilising the aforementioned strange imagery along with well times jump scares and more conventionally spooky characters to create an time well worth experiencing.

I think where my main problem with the series lies is in its inconsistency. I played each episode over the course of 2 days and at the end I had trouble recollecting my thoughts about specific episodes. Obviously their content was deeply imbedded in my mind; the distinct unnatural aura about each one sticks with you like a phantom. But because each game is flawed in some way, it’s hard not to view the entire collection as a mixed bag. What’s even weirder is that this is the second time I’ve played these games, an initial playthrough taking place back in 2018 where I found The Theatre and Harvey’s Box were the standouts. On this playthrough, I found both quite frustrating, and enjoyed The Lake the most for its cute simplicity with brief horror moments, the same game I rated the worst 2 years ago. Strange.

Regardless, Cube Escape remains an important figure the the greater “room escape” subgenre of puzzlers, achieving (and continuing to achieve) a landmark win for storytelling in the niche. While I’m perhaps too stupid to piece together the narrative cohesively, its insistence on using surreal visuals along with absurd set pieces makes it a unique playthrough. It’s deeply flawed on a gameplay level, stuck in the 2000’s with its inane point & click pastiche, yet it remains endearing in spite of it.