Curse of the Dead Gods – Review 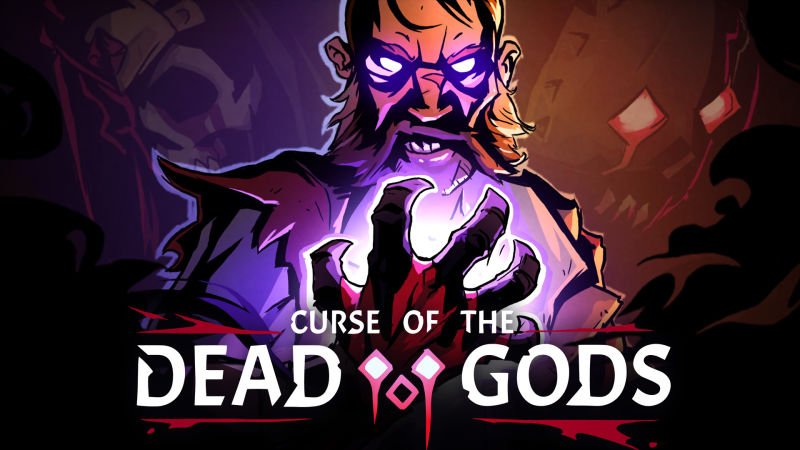 I’ve been enjoying rogue-lites again recently. They’re a category of game which are easy to dip in and out of, play one run and stop, or even play for hours and completely lose track of time. I’ve experienced Curse of the Dead Gods in both manners, sometimes squeezing in half a run before work, other times dedicating a whole night to it, and regardless of how you play it, based on its strengths purely as a top down brawler, it’s a blast.

Tight yet fluid, Curse of the Dead Gods makes use of a three-headed arsenal: our main all round primary, swift and often non-committal secondary, and a heavy hitting two hander. You start outside of the temple of the dead gods, and sat upon a few altars, your prospective weapons. We arm ourselves and enter the fray, battling with a myriad of ghosts and ghouls, and on a more cerebral level, our mind. In both darkness and ascension we become corrupted, and the temple offers little reprieve. We’re cursed! Modifiers which slowly but surely become a vice grip on our survival, and where I would potentially get overwhelmed in a card game of the same ilk using a similar system, the reactive controls found in Curse of the Dead Gods’ ARPG-style gameplay means despite the odds, I can overcome adversity through sheer skill.

Skill I lack, I found out though, as Curse of the Dead Gods’ difficulty isn’t bound to a mere modifier, it matches your potential expertise in combat as a wide range of enemies with brutal and cunning strategies. It’s proved to me the necessity of having three disparate weapons, as enemies in the same room can overwhelm you with a mix of agility, strength and trickery, and only by mixing up our style can we progress. The possible weapons in each class aren’t completely rigid. For example it’s possible to wield a Wolverine-esque gauntlet of blades, issuing forth quick flurries of stabs and swipes, followed up with a devastating blast from a perfectly timed flintlock. All the same, equipping a mace might slow your combo down, but wielding the unwieldy whip and lassoing enemies towards you, stunning them briefly, accounts for its relative sluggishness. The two handed weapons are less fluid in this sense, as their ability to combo with the other two weapons is completely diminished and they mostly serve as limit breakers or final blows, sacrificing visual and strategic finesse for pure utility. To this point, the game’s use of slowdown at just the right times makes wiping out an annoying bastard with a lofty swing of an axe all the more satisfying. We’re confined to a stamina meter, however, and while it sounds limiting, it makes the entire experience play far more methodical than it otherwise would have, maybe falling into button mashing without its inclusion. Stamina is used for dodging, the ever-important intangibility manoeuvre found in so many games nowadays, but also for the final flurry in a combo, or even just a single swing with heavy weapons. It makes you think about your next move, and you have to do it quickly. One oddity found in the game’s AI is that they only attack one at a time. No, this isn’t a turn-based RPG, but I believe this might be a measure to compliment the stamina system, resulting in a flow of considering every attack as a result of your limited pool of endurance, but not becoming overwhelmed by an entire swarm of enemies lunging at you all at once.

Even still, Curse of the Dead Gods is not a forgiving game. It’s a typical rogue-lite affair in the meta sense: choose a route to run down, collect currency in a run to use on persistent upgrades, die and repeat. And you will die, although much of that is down to the game’s difficulty entirely in its raw gameplay, as the “gradually improving” rogue-lite element to the game didn’t have as much of an effect as I thought it would. There’s only two currencies, really, split duties between unlocking future possible weapon drops, upgrading the aforementioned altars to contain better starting equipment and rather paltry passive boons. I’m not a fan, and as I kept playing Curse of the Dead Gods, I found my least favourite part of it was any of it that didn’t involve combat. To the point of difficulty, most rogue-lites get easier, either through more potent permanent upgrades, or through unlocking more varied equipment to strategically build around. Curse of the Dead Gods isn’t luck-based persay more than it uses a heavy pinch of randomness throughout its progression system. You can unlock weapons outside of a run, but there’s only a chance they will even show up in your next. You can banish them from appearing, but I found identifying those I didn’t want and purposefully getting rid of them to be laborious and time consuming. The permanent upgrades are limited to three per run, and even the most prestigious and expensive of the lot aren’t necessarily better than the cheaper ones, nor are they very interesting.

That’s only one element of the game’s difficulty, and while that side is rooted in a lack of significant progression, the other plays more into player skill, enemy variety, and in what seems to be a trend on this website, an intriguing use of light. Light plays a major role in the game by physically letting the player see, funnily enough. Environmental traps are hidden without illumination, and you take 50% more damage in the darkness than you do while under the light’s embrace. Your fourth “weapon” (more appropriately just a tool) is a torch, a stick of some fire perched on top of it, and holding it lets you circumvent the aforementioned negative effects of the darkness by forming a circle of light around the player. Littered around rooms are spikes, mechanical, hostile statues and poison mists, all of which hide under the shade of darkness and only reveal themselves when in light. Attacking with any of your weapons however plunges you into darkness as your torch automatically sheathes itself. Luckily there are a scarce and random number of sconces in the temple which you can use for static areas of light, but they need lighting beforehand, and often have limited range. Your torch acts as a weapon to a degree by dealing little damage but setting enemies alite, not only dealing fire damage but creating new sources of light. It’s a lovely threat you’re always managing. Nowhere near as oppressive as, say, Darkest Dungeon, or even the recently reviewed Tainted Grail: Conquest, but the darkness is precarious enough to rest at the forefront of the player’s mind. Heavy attacks and larger enemies have the ability to smash sconces irreparably to pieces, which adds a further element of positional strategy, sticking close enough to the flame to ward off the effects of darkness, but far enough away to prevent its demise. The designative “curse” in the game’s title comes in the form of a corruption meter, an inevitable consequence of our temple excursions. Entering the next room always corrupts us slightly, eventually (typically every five or so rooms if you’re unable to reduce your corruption percentage) cursing us, applying a modifier, of which start fairly innocuous and balanced in their boon-to-bust ratio of effect, but start to hinder the player significantly if you continually get cursed. I initially wrote in my notes that I found the concept interesting, but functionally served to irritate me, offering very little option of benediction and the inevitability of it was quite disheartening. That said, it becomes a non-issue of sorts. What I previously saw as unmanageable could be contained through planning your route better. Gold acquisition is an important part of every run, as room rewards often result in a choice: to acquire this thing, be in attribute, weapon or relic, either pay gold or pay blood, the latter further increasing your corruption meter. Once I realised just how important it was to avoid the latter option, the curse system became something easily curtailable with keen resource management, and even if you do get cursed, early curses can in some ways be more beneficial than they are detrimental. One curse makes gold drop more abundantly but has it disappear after a while, meaning if you play fast anyway, you’re just acquiring more gold. Later game curses are absolute ball kickers though, the menacing “final curse” causing you to haemorrhage blood constantly until its removal or, more likely, your death.

All this together makes Curse of the Dead Gods a captivating brawler, filled with genuine challenge which is largely down to player skill to overcome. It has a certain degree of eye candy too, smearing a thick, black border around every enemy and object to give it a half-cartoony look. The everpresent light mechanic works on a gameplay level, but also lets the game flourish visually with nice fades into darkness and shimmery textures when under the flames blaze. And while visually appealing, the levels quickly show their thin depth, repeating both structures and designs rapidly after a couple of hours of play. This again plays into my lack of enthusiasm towards the rogue-lite side of the game, as runs start to feel homogeneous over time with routes repeating and it forming a blur as every room looks the same. It doesn’t help that exploration inside each room is circumscribed to the bare minimum, often falling into a couple of breakable walls housing some gold which most times I just ran past anyway.

Curse of the Dead Gods lacks the replayability of others in the genre. Character builds and different strategies don’t really exist – reliant on drawing from a random pool of weapons making planning a non-starter. Still, the pool it draws from is deep, and with a wide fully stocked arsenal to play with, regardless of what I end up obtaining, I found myself loving experimenting with them. It’s a game which relies on the moment-to-moment gameplay, and luckily it doesn’t waste time on much outside that. While in an alternate universe, Cure of the Dead Gods could have been a masterful, linear ARPG or standard top-down brawler, in timeline we exist in, it’s a slightly muddled, slightly fettered blast of a game.