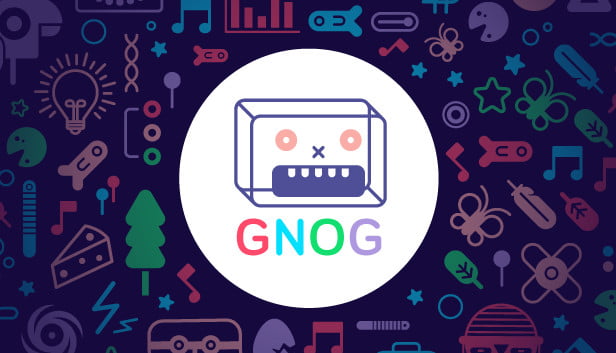 It’s easy to become situated on either end of the spectrum when it comes to creating something weird: you can either be so abundantly wacky that it becomes farcically dumb, or you can be convolutedly bizarre to the point of pretentiousness.

GNOG, in that way, is a testament to good, weird design, not weird enough it frustrates you in whatever higher points it’s trying to make and not weird enough to come off as trite. GNOG revels in being weird for the sake of being weird, all the while being consistent and focussed.

GNOG’s premise is simple: here are a handful of levels to prod at… have at it! And I do mean “prod”, perhaps on a purely literal sense if we’re talking about the IOS and VR versions of the game, but it’s still an apt description for the PC version I played on. GNOG’s levels are setup as little narratives, one being how a mouse eats cheese by distracting the humans by also feeding them, or helping a burglar steal money from an apartment complex, or freeing a bunch of butterfly’s from a hungry frog. They’re cute and never feel greater than they really are, and as a result actually playing the game is a treat.

Each level has you poke, spin, turn and whack parts of the world to set the levels story in motion. Think The Room in a way; diminutive worlds where tiny, tactile interactions lead to greater reactions. “Tactile” seems to be a phrase used a lot in GNOG’s marketing and it’s perhaps the most pertinent phrase they could have possibly used. Interacting with GNOG’s levels is a pure, visceral spark to the senses. Almost all of them in fact, but primarily touch as each lever, wheel and button in the game feels distinct and weighty. It’s not hard to understand why GNOG eventually got a VR mode added.

GNOG contains around 8 or so levels and almost all of them are hits, memorable partly due to how they latch onto your senses in an utterly blissful way. A personal favourite of mine was the space level which has you twist and turn an initially broken spaceship in an attempt to repair it and scan foreign objects. What this level really highlighted for me was just how good the animation is in the game, fluid and cute. It’s a real treat to just watch in action. Despite the narratives containing nothing of real value (I’m sure most children’s tales have more substance), I was still kept completely engaged by the games excellent game feel. Swivelling the external repair arm to fix the outer shell of the ship felt like my doing. Having the ship accelerate and slow down felt like it was caused by me, not in a trivial “press the A button to go faster” type of way, but the tactility of how you make it go faster translates superbly well in a way most games can’t achieve.

Of course when you think about why other games don’t achieve this degree of tangibility it becomes obvious, in the pursuit of other mechanics others simply can’t focus on GNOG’s rather rudimentary puzzle gameplay, but because GNOG focusses on that raw feeling over everything else, you just forget the game is as simple as it is.

The puzzles themselves are well balanced, sometimes venturing into lands of obscurity and other times realms of effortlessness, but most of the time striking a pleasing balance of difficulty and breeze. The brief tales told are never lost as a result of puzzles being too hard, perhaps in the way parts of Monkey Island and other point & clicks get lost in my mind due to just remembering the painstaking chore of using one seemingly insignificant item with another. GNOG’s simplicity is at the chore of what makes it…fun.

But as I alluded to before, GNOG does more than just “feel” good, it looks and sounds wonderful too. It’s visuals are perhaps the closest it gets to that “so weird I don’t understand what the fuck is going on” vibe, but steadies itself pretty well. It’s noisy, with every possible colour farted out onto the screen throughout it’s playtime, but it oddly looks consistent. Like I said before, it’s easy to be so weird it’s dumb, lacking logic and feeling random, but GNOG’s visual style – while dynamic – is thematically complete. Weirdness is just a side effect if you will, as GNOG’s explosive visuals match the story beats and audio cues really well. GNOG is 3D; character models have depth and turning objects also shows they are more than paper-thin sprites, but gameplay wise GNOG mostly utilises the 2D plane. As a result of the mish-mash of dimensions, GNOG’s visuals really standout when it does throw in 3D stuff to an otherwise 2D gameplay experience, adding to the presence the game has.

GNOG isn’t without flaw. To be nit-picky, the PC port using a mouse can sometimes feel a tad “off”, as the games mechanics feel destined for a touchscreen or VR environment, in the same way The Room on PC is a husk of its smartphone-self. One level in particular dragged and had no real purpose (the LOG level for reference), but outside of that, GNOG is just unadulterated fun. I feel at odds saying I wish there was a more lengthy plot behind GNOG, a journey linking the lilliputian worlds together, but that lack of grandeur is also what keeps GNOG feeling so warm and inviting. It’s not an attack on the senses, it doesn’t make you feel dumb for not “getting” it’s abnormality. It’s a loving, ebullient embrace.