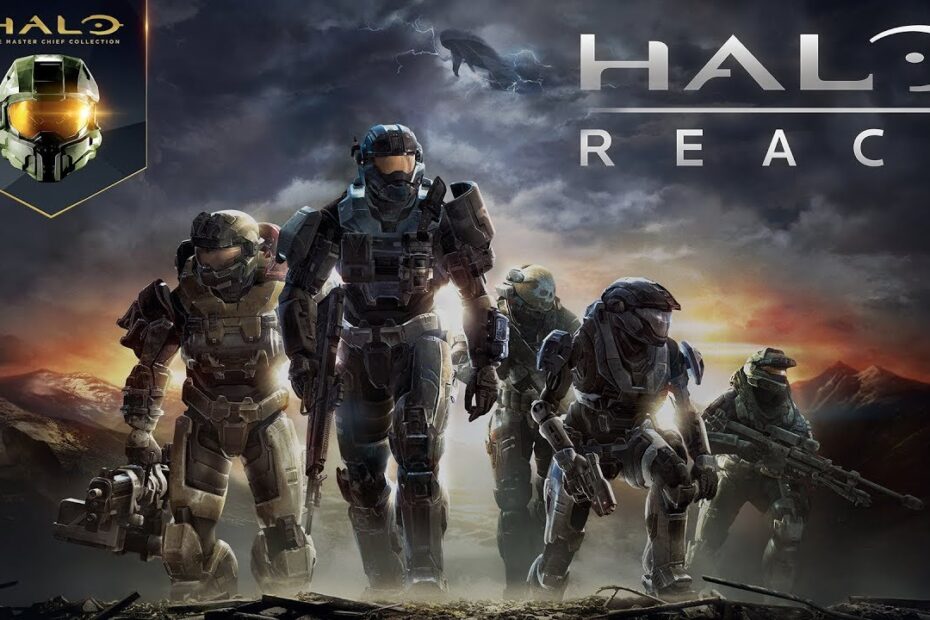 WARNING: This review spoils the death of several characters. As an additional note, the game was played entirely in split screen coop.

Halo is a name I lost interest in after Halo 3. It’s indicative of a few things. Towards the tail end of the 360 generation, my interest in video games shifted, and the daily routine of “FIFA, CoD, Halo 3” fell to the wayside. I was exploring more, experiencing genres I’d never heard of, gaining interest in indies and retro gaming, and the prosaic nature to Halo pushed it away from me.

Despite that, I’ve never disliked Halo. They’re fun games, from what I remember that is, as up until now, I hadn’t played once since secondary school, which mostly consisted of wacky forge custom games like “Classroom” and “Prison Break”. Halo: Reach was never a game I played at the time, I lost interest before it even came out. I’ve always been aware it’s a game fans like though – the swan song of Bungie, before a new generation of developers – but I didn’t know why. Well, I played it, finished it rather briskly with my partner in split screen coop (haven’t said that phrase in a long time) and yeah, it’s pretty good. Amazing? I’m not so sure, but it did enough to captivate me throughout and also spark some heavy reinterest in the series – perhaps great timing given the (hopeful) imminent launch of Halo Infinite.

Halo will always have my respect for being a first person shooter which doesn’t play like dogshit with a controller. Controversial opinion: first person shooters, by and large, do not work with a controller. I’m not a PC elitist, but Halo does something different to make it work with a pad which other games just don’t do. It’s heavily reliant on aim assist for one, and the way it tracks enemies, latches onto them and lurches off them at the right time is well documented genius. I believe it ties into the game’s pacing, predominantly in reference to combat, as firefights in Halo: Reach gradually ramp up in intensity, often culminating in short bursts of speed after more lengthy periods of strategic preparation. Cover is plentiful, and diving between them is paramount to success in Halo.

It wouldn’t work without top notch enemies AI, and Halo: Reach thankfully illustrates that suitably. Firstly, diversity in enemy selection makes every encounter feel somewhat unique. Grunts are infamously weak and bumbling, but in a swarm can be a nuisance. Elites act as the mirror match to your ally Spartans, sporting high agility, shields and stout weaponry. Brutes wield big fuck off guns and clubs, and with beefy health pools often take some time wearing down, while jackals and skirmishes are made of the same paper used to make The Flood but can slice you open in a second with long range weaponry. Inside each group exists variants which are immediately recognisable, striking designs which to me felt just as identifiable as those found in Doom. Like Doom, you identify them and act accordingly, and the different strategies you employ add plenty of variety to the game’s combat.

As I grew older and found a kinship with old school first person shooters, there came a period where I denigrated two weapon limits in games. They still peeve me off a bit, but I found its use case in Halo: Reach acceptable. It has the same effect Breath of the Wild’s often maligned durability system has, where weapons are so ephemeral you’re forced to swap them out constantly. Unfortunately, the same variety in Zelda didn’t feel as present in Halo: Reach, and I found myself using the same guns, not out of preference, just because the game handed them to me so often. The standard assault rifle is a staple, paired often with a plasma rifle or, later on, a brute carbine. Most of the weapons have visceral tangibility; the plasma weapons in particular shred shields in a way you can almost feel. Yet, I found the selection lacking, and my play style in reference to my arsenal was far too homogenous for my liking.

Halo has historically always allowed the player to roam the skies from time to time, but I don’t remember it ever being as prevalent as it is in Reach. Several escapades of the twelve mission campaign have the player engage in aerial combat, all of which presented a strange phenomenon of bizarrely slow pacing. The combat itself is more than acceptable. I particularly enjoyed one mission where you head out of the atmosphere inside a more traditional fighter jet, and opposed to the other aerial sections, it’s persistently rapid and blisteringly intense. All of which, however, outstayed their welcome, and just when I felt they would end, they would go one for another fifteen minutes. The on foot sections don’t suffer with this problem, perhaps in the case of the first handful of missions the opposite occurs in fact, where I felt like I’d hit the fourth mission in no time. It’s just weird, and it left a bad taste in my mouth, as the sections are fun and a nice change of pace, yet didn’t end at a suitable point and ended up boring me. The narrative – or the characters to be exact – wrap this review up as the area which downright confused me. Context is king, and the context I had going into this game was that people genuinely became attached to these characters. Noble team, consisting of six Spartans including yourself, make up the primary cast of the story, and slowly but surely, each and every one of them dies (or in one case, their fate is left unknown). My partner told me she had affection for these characters, and when we saw them succumb to their fate, the image on my sofa was one of incongruous emotions. On the left, my partner expressing genuine sorrow at the death of Jorge and Kat. On the right, myself, in consternation at how anyone could feel anything for these underdeveloped husks. Part of the problem is the game’s short length. I couldn’t name you more than a single characteristic to Noble team, as other than brief cutscenes at the start of every mission, the game doesn’t have time to develop them at all. Kat is a sassy lady, while Emile is laidback edge lord (even more vividly expressed by the cringeworthy skull he carves into his helmet). Jorge is the only character with any sort of depth, as the game lightly sprinkles in some details of his relationships with other secondary characters, but again, his death left my eyes dry.

Halo: Reach, therefore, didn’t meet my expectations, because my expectations were based on classic Halo gameplay twinned with emotive personality-driven storytelling. The former passed with flying colours, proving an enhanced version of everything good about prior titles, but as for the narrative? Give me back my Sergeant Johnson.