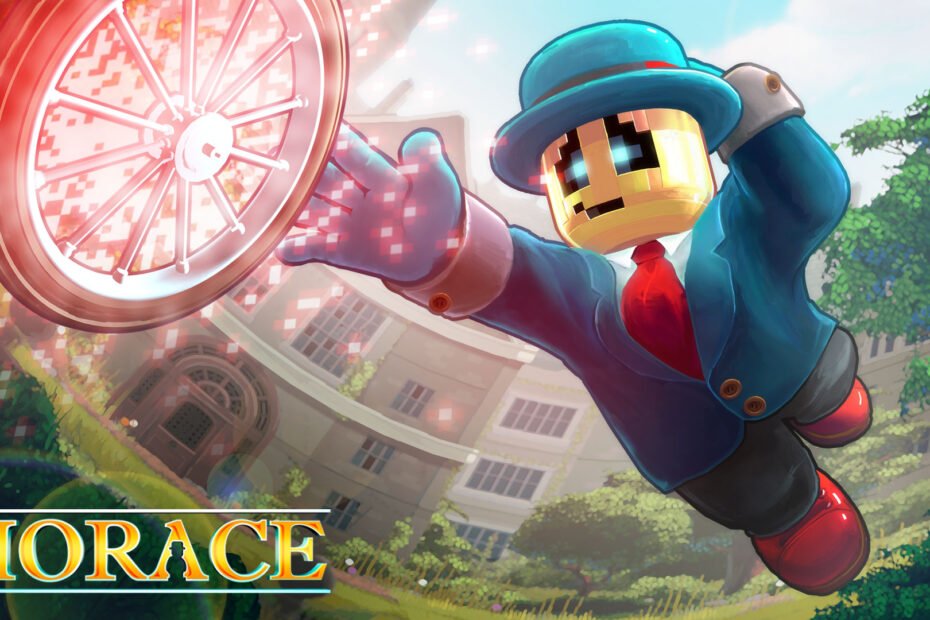 It doesn’t feel particularly nice to put into words why I didn’t enjoy someone’s passion piece that much, because that’s what I’m doing here. I didn’t enjoy “Horace” that much, and “Horace” is most certainly a passion piece. It’s a broad glimpse into the influences and interests of developer Paul Helman, and in a sense it’s the best of its kind. While many references have definitely gone over my head, acknowledging a reference has been made is actually the easiest part of this game due to the frequency they’re made. Horace in a machine gun, loaded with sounds and images of Helman’s passions, rapidly fired in the form of a charming yet wholly middling video game.

“Horace”, an allusion to the old 80’s Speccy game “Horace Goes Skiing”, thankfully plays nothing like an old 80’s Speccy game, rather it’s best categorised as a 2D platformer with a tendency to digress into random genres, as per the nature of a game heavily reliant on varied source material. Throughout Horace, you traverse a world torn apart by a war between robots and humans with a quaint personal objective of collecting one million pieces of rubbish. Built on top of that is a story centred on the concepts of life, death, consciousness and feelings, which as a robot can understandably feel very foreign. The player protagonist, referred to as simply “Robot”, also acts as the narrator and elucidates on many of the aforementioned concepts from his perspective as he learns more about humanity and culture, all the while journeying into a narrative full of alacrity, destruction and unadulterated references.

I quite enjoyed the first few hours of the game. I knew there were clearly references I was missing as a result of not being in my 40’s, but I did take quite kindly to Robot and his origin, an endearing incipience depicting the nurturing stage of life through the eyes of a machine. In the same way we love video games and TV as a child, so does Robot. His adoration for such things and how they always remained present as he learns more about the world too mirrors how many people feel. Not in a sterile “programmed to love these things” way either. Robot, unlike every other character, feels genuine and oddly human.

Perhaps this is because Robot as a character doesn’t feel reduced to a lazy reference, as “Horace” is overloaded with cheap references, emphasis on “cheap”. While Robot isn’t deep in any sense, nor is his story original, he doesn’t stoop the level of most other characters that exist purely for a quick laugh. Sure, as a Brit, I did let out a brief stream of nose air when I saw the character name “Anton Deck”, but he’s arguably a main character! His characterisation is non existent…because he feels crafted for that one cheap gag.

I’m not opposed to some quirky allusions though. Day Off for example, a playable clone of “Outrun”, is a perfect example of a reference done right. Not only is it just a fun time waster (I mean, it’s pretty much Outrun so how could it not be?), but it highlights how good the visuals are in “Horace”. Pixel are has been at the forefront of indie games for some time now, and many are rightfully sick of it, but “Horace” utilises it in a way that’s both thematically fitting (given how the game is just one big homage) and just downright gorgeous at times. In the case of Day Off, it pulls off the faux-3D effect used in “Outrun” superbly, offering a real sense of depth and realism, or as much realism as a game in that era can offer. The same goes for the “Space Harrier” and weird dream sequences, both play out in old Yu Suzuki fashion, and they look stunning. Other than the arcade which is furnished with additional arcade cabinets such as “Hungry Ghost” and “Dance Invader”, “Horace” makes similarly unsubtle nods to primarily British staples and events, including “Coronation Street”, “Charlie and the Chocolate Factory”, “Halloween” and a heap of musical covers. Again, nose-air moments. They don’t warrant belly laughter, not at least for someone my age, but they’re are cute to see. Mostly.

While “Horace” excels in its visuals, the audio side is less flattering and in contrast comes off quite weak. Not in a literal sense however, as some tracks in the game are ear-piercingly shrill. Some tracks just hurt my ears, with many bearing high notes that really attacked my soul. Other songs just do not translate well to the games chirpy style, coming off as monotonous and whiny. It’s a shame too as several tracks in the game are covers of popular songs, ranging from “Danse Macabre” and “Gymnopedie No. 3” to “Fur Elise” and “Moonlight Sonata”. They feel “integrated” in the sense they’re all classical pieces, but again their primary purpose is to evoke emotions felt from when you first heard the song and where you heard it. For me, “Gymnopedie No. 3” brought me right back to the eerie landscape of Rusty Lake. My Dad loved hearing “Danse Macabre” because he loves Jonathon Creek. The poignant element here is that while I love Gymnopedie in “Cube Escape”, I don’t love its implementation in “Horace”. “Horace” is reliant on you knowing these tracks and having prior attachments to them. If you don’t, they flop hard.

“Horace” is too referential for its own good, that’s a given, but where it really damages its enjoyment value is in how badly it’s paced. When it comes to pacing, usually something is too fast or too slow. Occasionally, however, there comes a time where a game is both at the same time. Rockstar in my opinion fall into this trap quite often, perhaps a burden one carries when deciding to be open world with games like “Red Dead Redemption 2” and “Bully” flip-flopping between having character development and missions occur at a glacial pace to then all of a sudden change over a small period of time. “Horace” has this same pitfall. As previously stated, I quite like the opening. It takes its time developing Robot as a character, introducing mundanities and pleasures of life and showing how a Robot would react to those things, sprouting his love for video games and TV in a believable manner. Then, all of a sudden, a main character dies, and time is flung some time into the future. Shit has quite frankly hit the fan in the world of “Horace” and you (both Robot and the player) come to grips with this “new world”. This is a fine shift, narratively speaking, but from this point onwards the game never finds its footing, constantly flicking between objectives, characters and plot points as if it has an attentive disorder. You quickly reconvene with a character from before the incident and to my surprise, this character turns out to be perhaps the most important character second to Robot, which is stunning because he is given absolutely no time for development. Neither before or after the incident does Mr Silton feel like a pivotal character, nor a complex one. It’s worth noting his name is Barry Silton, which TVTropes states is a play on “Paris Hilton”, another zany and pointless reference, and he never develops further than that one pun. Suddenly you’re thrown into a quest to reunite the family, with members scattered across the country. You do in fact reconnect with these characters, all of which are paper-thin in terms of personality, and the game strangely focuses on random ones for a while, having you explore Alice’s quaint seaside town for an extended period time for no real reason.

I could go on for the entire game, and for my sake (and for the sake of that chunky paragraph above) I’ll stop, but I can’t emphasise enough how bizarre the pacing is in this game. Unfortunately, this hurts the games gameplay which overall…isn’t the worst? A 2D platformer at heart, “Horace” excels at a few things, notably the basics. Running and jumping, although a touch on the floaty side, feels fluid. You can expect to calculate jumps and landing pretty well. Most of the game focuses on 2D platforming, and in terms of level design doesn’t do anything particularly exciting but nor does it do anything particularly bad. Obstacles and enemies are well defined and don’t change much.  Hostile robots, electricity and water run rampant in the world of “Horace”, understandable dangers if a bit boring. Where the game slips up is in its difficulty. Have I stressed how much of a homage “Horace” is? It took the brutal and unfair parts of old games too! What joy! It’s hard to zero in on what makes it so hard though, but it’s evident Helman knew it was difficult by the pathetic excuse for a help system, whereby you essential gain a shield that protects you from some damage, which feels more like papering over the cracks rather than fixing the integral rage-inducing difficulty of much of the later half of the game.

There are some elements I can identify as problems though. Bosses for one are terribly designed, notably the water boss and final robot duel, the latter of which turns the game into a button-mashing nightmare whereby the game plops you into a titanic mech, controlled through an in-universe gamepad that feels eerily similar to playing a fighter through Stadia. The water boss highlights a bigger issue any old school platforming loving gamer could see a mile off: water controls. The discussion around water controls in general is well spoken on, why they suck being something that sticks out as an underlying issue with most games utilising water sections. Any game that requires you to use a different control scheme unnecessarily is irritating, and “Horace” does so with its water levels; painfully floaty 2D sections where tunnels are far too tight and packed with hazards made worse by the game controlling even worse if you use the DPad. I might sound like an elitist wanker by saying this, but 2D games control better with a DPad. It just makes sense. In water “Horace” controls slightly better with an analog stick, which makes me want to cry. Partly because I’m essentially forced to use a stick for a 2D game, but also because it doesn’t solve the problem. This is all compounded by the games indulgence in these sections, cropping up so frequently they feel just as common as on land sections.

The final nail in the coffin for me was understanding how laser-focused the game is on the elements I didn’t like. I don’t hate “Horace”. Hating a game where so much love and passion (and time I might add, 7 years!) has been poured into it almost feels immoral. I like the platforming when it isn’t sadistically hard. I like Robot as a character. I like the whimsical scenarios he gets himself into. I like the small nods to other games. But I just can’t deal with being inundated with cutscene after cutscene detailing a story I frankly don’t care about. “Horace” simply isn’t focused enough. It’s a broad stroke, painting a intricate painting of British 80’s culture, which people of British 80’s culture will enjoy. Perhaps I was born 20 years too late to truly enjoy “Horace”, but I’m fine with that. It exists for a certain group of people, which doesn’t include me. Sometimes you just have to accept not everything is for you, and I accept that with “Horace”.