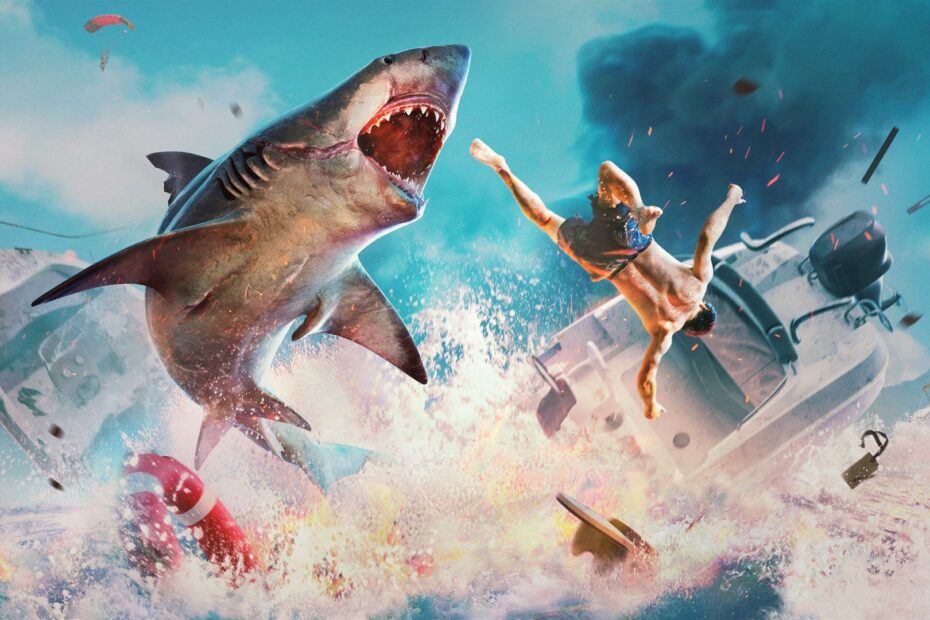 Multimedia’s obsession with “sharks” feels like an inside joke I’m not in on. Sure, I haven’t seen Jaws – and no, I won’t apologise for it – but even still I find it hard to understand why sharks are such an iconic threat in visual mediums, since sharks as an animal are confined to the sea, a vast area of the planet humans generally stay the hell away from and do so with relative ease. They look scary with their big, bloodied teeth and hardened, sleek bodies, but hey, I don’t like swimming, or even really the beach that much for that matter, so whatever trepidation they may instil in surfer dudes and volleyball players across the globe is lost on me, one of the many benefits of being a #gamer, I suppose.

Maneater though, a game which you play as one of these land-fearing fuckers? That’s more my style! I remember catching glimpses of this game back when it first launched and thought it looked like an amusing rendition of the absurdity Sharknado was capturing for film, for video games. I’ve never seen Sharknado, mind, but I can definitely get behind the take on the “genre” if you will, almost highlighting how ridiculous it is for a shark to be a threat to humanity. That’s not quite Maneater’s angle though, more so it takes the silly nature of those films and lets you play with the idea of being this overpowered, comical terror from the deep in a fun, if tropey “video gamey” way.

Hammy from the get-go, Maneater introduces us to antagonist Scaly Pete and his profound yet twisted love for Shark hunting. We’re shown this through the lens of a documentary following the man and his exploits, named the titular “Maneater”. As Pete guts a behemoth shark for the camera, out we literally pop, the soon-to-be terror of Port Clovis, gobbling his hand off as we’re flung into the ocean to begin our whimsical adventure filled with death and… mostly just death really.

Open world games are at a point now where they really have to do something fresh and exciting to engage not only me, but a growing audience of players who are finally asking for more out of this weary genre. Some games still carry vestiges of the drab “Ubisoft Formula”, but many overcome this anchor by excelling in other areas instead. Spiderman has dreadfully dull side missions, but has combat and movement so engaging you partake in them anyway. The much maligned Crackdown 3 also suffered by implementing cookie-cutter side content, but evolved the original games movement mechanics to still remain interesting in an otherwise trite game. In a sense, Maneater succeeds despite unimaginative mission designs because it’s a shark game. Video games centred on sharks have existed before of course, like Depth and those in the Hungry Shark line of games, but none go for the scale Maneater does. Maneater feels like a true AA open world game, flaws and all.

The map of Port Clovis isn’t tremendously large, but feels big enough to allow you to swim with the fishies freely. In fact, that was the very first thing that struck me as impressive. In my mind, Maneater carried the exact same connotations Sharknado does: campy, low-budget and absurd. For cinema, film-makers can intentionally edge themselves into the “so-bad-it’s-good” market, but when a video game tries to do that it comes off just plain bad; see Goat Simulator or Who’s Your Daddy? for paragons of bad games knowing they’re bad but trying to trick you into thinking that makes them fun. Spoiler: it doesn’t. Instead, Maneater flirts with silliness and peculiarity, but doesn’t skimp on making the core controls fluid and responsive. Controlling the shark is snappy and a breeze, simply reacting intuitively to the thumb sticks as any character would in any other third person game, which to a land-faring human like myself means I can really relate to the shark on a deeper level.

That said, while the game controls fundamentally well, it doesn’t reach a level of complexity you would hope for. Outside of basic movement – including a dash (or “run” to legged creatures) and an evade move – you’re left with just an attack button, which means a lot of Maneater is dominated by continual mashing of the right trigger to nibble on any big fish hunter, rival shark or voracious turtle that stands in your way. The game does quickly establish a “thrash” ability, which lets you waggle a foe in your mouth to deal damage by lashing the right stick back and forth, but it’s essentially a flashy regular attack and I didn’t perceive any benefit to using it over mashing the attack trigger.

Regardless, it all feels nice and responsive, so what remains is a pretty bog standard open world set under the sea with an amusing documentary pastiche lightly draped across it all, key word being “lightly”. The narrative following Scaly Pete on his shark-slaughtering life journey is mildly amusing in many ways, from the over the top voice acting, the complete insanity of the premise and the way the show is edited, overlaid with hashtags and chiched music poking fun at modern reality TV. I liked it for the most part because it truly added to the outrageous theme of the game. Stripped away, Maneater is far less stupid (that word being used in the nicest way possible) because the gameplay itself never really tops this narrative in terms of outlandishness. Unfortunately, you don’t have to imagine a version of the game where it’s stripped away, because the game utilises this mode of storytelling sparingly. This isn’t helped by the general pace of the game which many open world games fall into, and it’s a shame really as even though it wasn’t “laugh out loud” funny, it added a lot to the tone of the game. Without it, Maneater appears far less silly, and “silly” is exactly what a game like this should be.

When these documentary-style cutscenes aren’t present, the “story” is conveyed through a very convincing melodramatic narrator (you know, think Kitchen Nightmares US or any other trashy American reality show), issuing forth facts and tidbits about the world of Port Clovis and more broadly about sharks themselves. Similar to the cutscenes, I like these for just how cheesy they are, and even though, by and large, they’re more groan worthy than the pure cutscene stuff, I still enjoyed them for what they were. Some lines do repeat though, quite frequently in fact, and combined with the repetitive mission structure the game employs, this starts to grate on you quickly.

So what do you actually do? Starting as a wee pup shark, your objective is to feast on the residents of the sea, grow to a larger size and mutate, eventually culminating in revenge as you target Scaly Pete, your mother’s murderer. In one regard, the game manages to communicate a sense of growth effectively, as your actual size swells and your model becomes more terrifying and hardened. In another regard, yet again, I don’t think the game goes far enough. Mutating should be the main goal in my eyes, in a game this ludicrous, and while a system to do so exists, it feels surface level and elementary. Many mutations are simply stat changes: faster speed, more damage, higher resistances etc. It’s not interesting when any game does it, but when a game like this has no limits to what they can do in terms of silliness, it’s a shame such commonplace mechanics were favoured here. To the game’s credit, they all change your appearance which can lead to some wacky looking sharks, in true Sharknado fashion, but the true effects they have are quite underwhelming.

Not only does it feel basic, but your period of growth can be cut quite short due to the way the game is structured, or more directly put, it falls into the pitfalls of many open world games. Outside of the main objective – which might I add are never really explained plot-wise and all feel like mandatory side missions in a gameplay sense – each area of the map is littered with mundane quests which fall into two categories: kill a specific or certain amount of fish, or find landmarks/number plates. The former stays somewhat entertaining throughout, almost exclusively because it’s fun getting to a point of superiority whereby you can tear smaller species to pieces, therefore despite the rudimentary control scheme, it’s still enjoyable to a degree. The latter group is as dull as it sounds, the only saving grace being (in the case of landmarks) that they’re accompanied by unique narrator quips and visual gags which are, at times, genuinely amusing. Finding number plates? Yawn.

The major flaw in this is how prevalent the side content is, and because it’s nearly indistinguishable from the main objectives, I just did every task before moving onto the next area. Like many open world games, developers seemingly rarely account for overleveling in this way, and I hit the max rank quite early into the game, causing that sense of growth to feel fleeting and underwhelming.

I think this susceptibility to overleving combined with the lackluster mutations are the games biggest shortcoming, as it neatly describes the general issues the game has. Overleving makes the game too easy, which exposes the rudimentary combat and inadequate depth. The lackluster mutations make the game too reliant on the narrative for setting the tone, and as the narrative is frequently left in the shadows, it further highlights how fundamentally tame the game is.

Maneater will go down for me as a stellar example of the power of expectation, because despite this review likely reading mostly negative, I left with a positive attitude toward the game. What I saw of Maneater on release brought emotions of disdain for a cheap and tacky game hoping to see streamer success for just how dumb it was. In reality, Tripwire were wholly aware of what they were making, which was, if anything, a tasteful homage to shark culture, be it the serious and monumental Jaws, or the satirical and cheesy Sharknado. I think with more gags and wackiness, Maneater could’ve been the true parody video games are asking for.