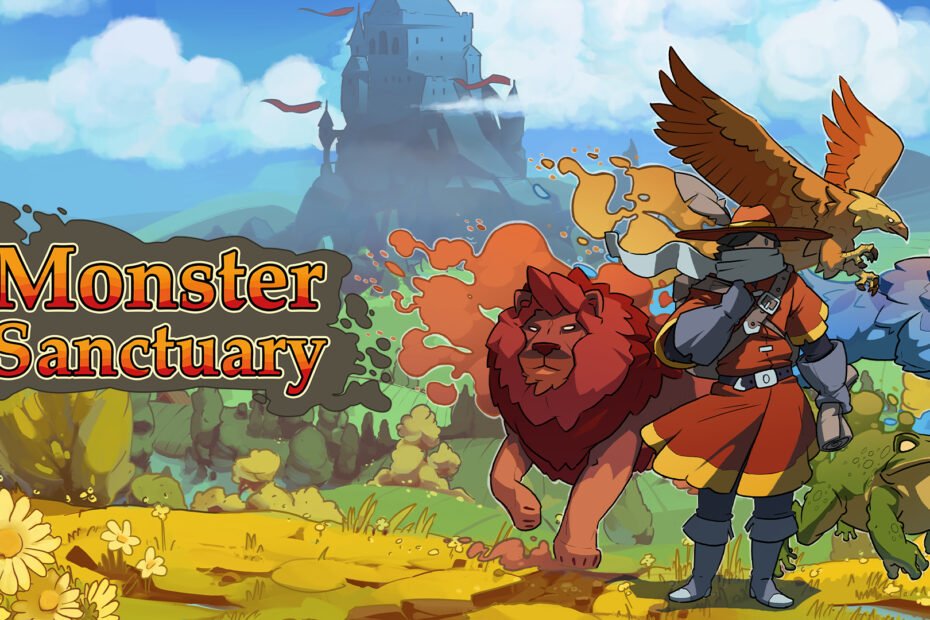 I always try to go into reviews without any interference from other opinions. Obviously that’s quite a quixotic desire. Simply knowing the game exists is usually enough to know whether people like it or not, but in the case with Monster Sanctuary, the first I saw of it was on Game Pass. I downloaded it, played for several hours and came to write a review on it.

Well… Not exactly. I did Google the game to get some rudimentary background information for my game log *just* before I started this piece (Developer, release date etc). Google shows the aggregated Steam review score right at the top. My day is ruined.

So yeah, Monster Sanctuary seems to be something of a hit with many people. I don’t know why, because in my experience, Monster Sanctuary is a bland, pared back Pokemon “rival” with laughably basic Metroidvania elements. I wasn’t expecting a true competitor to Pokemon. I don’t think anyone really is given Nintendo’s wide, tyrannical grip on the genre, but game’s like Temtem have really proved it’s possible to exist in the same realm and do enough different to be worth your time. In my brief experience with Temtem, I found the stamina system was a great evolution of Pokemon’s dated combat, the world was vibrant and easy to explore and the open online element was unique and something I’m sure many Pokemon fans have privation for.

Monster Sanctuary has none of this. Top to bottom, each and every element stacks up considerably worse than the competition. It’s not a train wreck; some parts of the game are competent and somewhat enjoyable, but similar to my aspirations to write a review with no outside influence, it’s impossible to review a creature collecting game without being influenced by the games it competes with.

The setup for Monster Sanctuary is barebones and frankly just as boring as many plots of Pokemon games, a victory in some sense, I guess. Provided with a legendary monster spectres, you play as one of the four monster guardians, a chosen protector from one of the four esteemed family blood lines. The world of Monster Sanctuary – a once still and peaceful place – is beginning to be overrun with wild monsters and the rare sight of a “champion” monster is becoming less rare. You set off as a lowly plebe with your special monster at hand to explore the world, catch some beasties and fight some dudes. It’s all very simple.

And like many early Pokemon games, the plot never really materialises into anything substantial, which is fine, especially when you factor in how bloated and trite modern Pokemon games are with their convoluted plots inundated with characters and cutscenes that you couldn’t care less about. Pokemon Fire Red is one of my favourites, even after a recent playthrough. It’s unabashed creature collection at its finest, with nothing bogging it down. Monster Sanctuary in a similar vein doesn’t bog you down with tons of nonsense. You can forget the story for the most part, and if you’re anything like me you probably will as it’s as unmemorable and unoriginal as could be. Plot points are easily foreseen, and dialogue is woefully written. Every character speaks in the same plain language with no perceptible personality traits. Even the “jerk” characters like one of your rivals from another family is so uncreative in their arrogant demeanour that they just melted into the rest of the characters in the grand scheme of things.

Like I said though, I like the original Pokemon games for the simplicity, the raw action, the conciseness. Monster Sanctuary is all of these things, only to a fault most of the time. In terms of combat, Monster Sanctuary ditches puny 1v1 and 2v2 battles and employs a 3v3 system, every fight. It’s neat in principle, and allows for a lot of creativity both in the battling and planning stage. Before each fight, the enemy team is displayed with their weaknesses, resistances and attack types shown clearly. From there, you can select the 3 monsters you want to use for the fight, using the type system found in all of these games to your advantage. Battling is at its core quite simple. You have 3 attacks each turn split between each monster and you choose which attack they will use and in which order. A superbly basic feature is compounded on top of this in the form of a “combo meter”. Each attack “hits” a certain amount of time. Some attacks consist of a flurry of weak attacks, while others are a single roaring smash. The combo system works by accumulating each hit after an attack into a meter, each hit representing a 5% increase in damage. So, for example, leading with a hail storm that hits 6 times for weak damage means the next attack will have a bonus 30% damage on whatever they deal.

It’s a complexity that’s easy to understand yet hard to master, and in all honesty it’s a shining gemstone in an otherwise vanilla game. The rest of the combat: the type matchups, the physical vs magical attacks, the damage or status moves, it’s all very well worn land. I can acknowledge that Monster Sanctuary’s combat does allow for creativity and overarching complexity, but in my experience with the game it felt unnecessary as the game as a whole is stupidly easy and feels like a waste of time.

That last part is especially important as it led to me putting the game down prior to completion, a wretched sin in my weird ritual of video game playthroughs. Despite the combat as a whole feeling rather bland, I could maybe have pushed through if two things excelled: the creature collection and the Metroidvania element.

Let’s just bash through this latter portion quickly. Utterly pointless and redundant. Exploration has always been a key element to creature collection games. Pokemon used “hidden moves” to block off areas for later in the game, similar to a Metroidvania but missing the nimble platforming. Monster Sanctuary injects that back in with standard 2D platforming elements, but does nothing with it. Puzzles are reduced to simple lever and switch roadblocks, while the actual platforming is lacking in challenge and reward. Often times, the puzzle platforming sections simply reward you with a treasure chest containing a basic food item or low level piece of equipment which will undoubtedly be outmoded by your current kit. I could perhaps praise it somewhat if the abilities it utilises were fun, but they just aren’t. I unlocked a double jump and passive ability to go underwater before I quit, and neither of them changed the game in any significant way. The end reward was always a superfluous piece of corn.

“Superfluous” is maybe too strong. Food items do play a role in the overall strategy of the game, alongside equipment like weapons and items in addition to skills learnt by levelling. Levelling is implemented in a similar fashion to modern Pokemon games where EXP share gives every party member EXP, as opposed to just the fighters. I had about 20 monsters when I stopped playing. That’s 20 monsters I had to micromanage with, at a minimum, their skills, and if I actually want to use them in battle I better equip them with the correct gear and feed them too. Pokemon’s item system goes the other way, a far too rudimentary 1 item limit on all Pokemon, but levelling also wasn’t such a chore in those games. Every handful of levels you get the chance to learn a new skill, and that’s that. The combination of all these systems, while not bad in isolation, leads to an enormous headache.

Of course I didn’t really end up caring for the majority of my monsters. In fact, despite the party size topping out at 6 members, I never really bothers with half of them and instead confined my mental capacity to just nurturing 3 monsters, the 3 that would battle, every battle. Because I never swapped them out. Despite the type matchups and whatnot, I never felt a need. And guess what? I never lost a single battle! Not a wild encounter, not a champion battle nor a keeper battle. The game didn’t demand enough of my intelligence to even bother with strategy.

There’s almost part of me that would be able to overlook all of this in some fashion if the game had that raw charm going for it. Modern day Pokemon still has some appeal in the recesses of my heart simply due to how striking some of the creature designs are in that game (along with added nostalgia no doubt). Do I even need to pose the rhetorical guessing question. Monster Sanctuary, similar to Temtem, fails outright in this regard, lacking any sort of personality when it comes to its world or creatures. The blob monster. It’s name? Blob. The rock monster? Rocky. How about the mushroom monster? Fungi. And that’s just the names. Even those with more esoteric names like Yowie or Vaero are just plain, mundane illustrations of yetis and birds respectively. It’s made worse by the seemingly random design behind their typing’s. Each monster just feels like a random, amorphous blob with random stats and random elemental weaknesses. Bleurgh.

Lets end on a high. The game looks very nice. It bares quite a striking similarity to the same style Owlboy rolled with, ironically another game with nice presentation and… bad everything else. Despite designs and landscapes looking vanilla, it’s done in a way with a real sense of depth and life. But sadly it just goes to show the chasm between the presentation and the gameplay.

I think most people like going into media with no expectations because you can’t really be disappointed. Even before getting a glimpse of the reviews, I felt disappointed. Disappointed because Monster Sanctuary clearly has the framework for a perfectly valid competitor in the create collecting arena. Its combat allows for strategic depth, the implementation of Metroidvania elements is a no brainer, and the lack of creativity in the genre means people are yearning for this type of game. And clearly people have liked it, but for what reason I don’t think I’ll ever really understand.