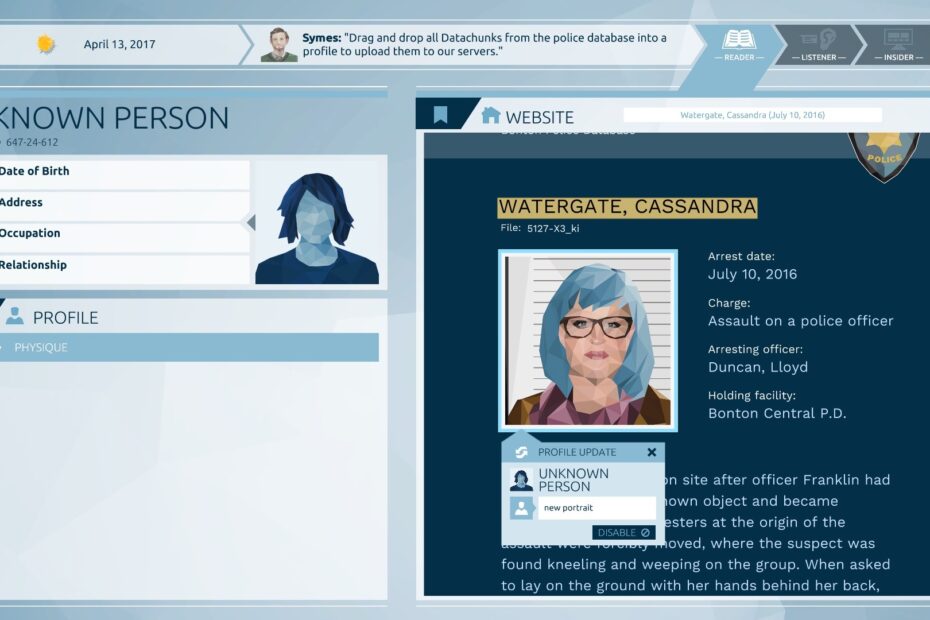 Last year I delved into a subgenre of simulation games I’d never touched before, which is weird given how much I enjoy the dystopian theme most of them touch on. That subgenre is investigative hacking, you play the role of some sort of overseer trying to undercover or control people through technology.

So far, the standout title buried within this niche sphere of games would have to be “Mainlining”, a semi serious spy adventure full of pop culture references yet some grounded moral teachings. It’s nothing groundbreaking, the gameplay loop can be needlessly convoluted at times, but it struck a nice sweet spot tonally and didn’t shroud itself in a cloak of grandiose like other releases a la “HEADLINER”.

With “Orwell” evidently not taking the top spot for me, it begs the question where does it fit in? Somewhere in the middle. It’s no “HEADLINER”, a game so blunt with it’s social commentary it would make a fine medieval bludgeoning tool, but it also fails to capture the same charm and wit of something like “Mainlining”.

The games title instantly piqued my interest, all the while sending warning signals for heavy handed critique. Those warning weren’t totally baseless as I found out, but where by no means as bad as I dreaded. Orwell’s premise is simple: you are Big Brother, spy on the people. The catalyst for the games plot revolves around a politically charged series of terrorist attacks in a country called “The Nation”. The first of these attacks is an explosion in a sector named “Freedom Plaza”, which as we find out is partly as a response to the passing of a law titled the “Safety Bill”. See where I’m going?

Even today, George Orwell’s “1984” feels more original and nuanced than this. I understand their intentions in creating simple, easy to understand names as symbolism for The Party’s (yes, they’re really called that) reductive, oppressive rule, but it’s just not nuanced enough.

And that’s really my sole problem with Orwell. It lacks nuance. The moral messages and characters portrayed in the game are simply not deep enough for the story it wants to tell. The rest of the game follows you, the investigator, uncovering information on a group named “Thought”, a reactionary movement against the Orwellian practises taking over The Nation. The weird thing is I can’t say I was ever bored by the story. It’s basic and straightforward, but it’s also a double edged sword. The characters in the game feel stereotypical, yet bar one character never border on annoying. They’re well developed and piecing together their stories and motives is well executed task.

It’s a testament to the rest of the game really, a solidly made and presented investigative adventure. Music is minimal, often looping the same cold ambient track, but occasionally switched in accordance to reveals in the plot. The user interface is clean, everything feels smooth and logically placed and makes the core gameplay is an easy ride…maybe too easy?

One of my complaints with “Mainlining” was it’s unbalanced gameplay, at times proving mind numbingly easy yet at others diving head first into “convoluted deep”. “Orwell” avoids both problems by making the investigative process more of an adventure than actual investigation. You never really feel like your actions (or lack thereof) are having an effect; you’re on a track and you’re going to get there either way, in good time too. One of my favorite games ever, “Stories Untold”, even has issues in pacing, where the gameplay gets in the way of the story, but “Orwell’s” easy going nature completely avoids this issue.

Now that’s not to say choices don’t matter. I can pick a handful of scenarios where your actions affect the characters reactions and even livelihoods, but it never quite feels influential. You’re on the track. You’re getting to your destination regardless.

An area of contention for me was the overarching plot, which the game flip flops in focusing on, unable to decide whether it’s main focus should be on the dystopian world the characters live in or the characters themselves. It’s not a black and white decision I know; in most cases media is a mixture of both, but “Orwell” feels indecisive as to what side it wants to focus on. This is potentially a symptom of the “episodic” nature to the game, where some chapters like 2 and 5 feel like story driven sections about terrorism and the Orwell surveillance system respectively, yet others like 1 and 3 feel like more personal investigations into specific characters like Cass and Nina. I’m willing to concede this may be incredibly subjective on my part, although I definitely felt a disconnect at times.

Despite feeling down on the game overall, I feel it’s more out of disappointment than hatred for a poor quality game. Because “Orwell” isn’t. “Orwell” is a fine game, well made, well executed and enjoyable throughout, but it’s not going to stick with me. It was a fun adventure yet I’m willing to bet come next week very little of the game will have lodged itself into the deep recesses of my brain where chunks of Orwell’s 1984 reside, and that’s it’s most damning flaw.