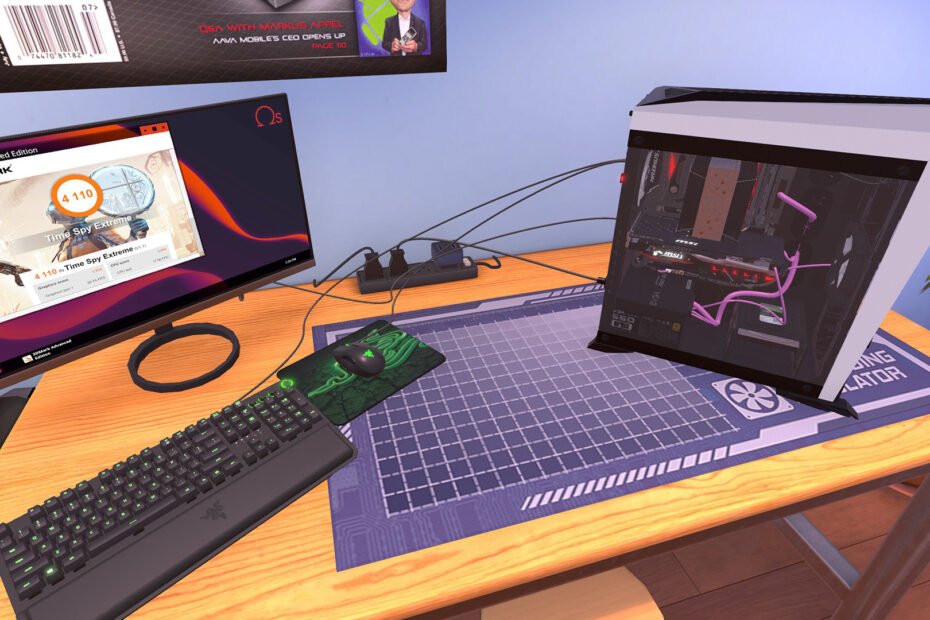 Simulation games have hit a deeply saturated point in the market. Insert a random word followed by “Simulator” and you’ll likely find something on Steam, or for the more niche ones, Itch.io. I’ve played a few and my thoughts on them are as homogenous as the games are, “they’re fine”. They all seem to follow rigid templates: Unity driven games allowing people to play out mundane tasks with a business element enveloping the entire ordeal. I totally get the appeal though. The cathartic release of accomplishing something so routine is hard to describe, but everyone has experienced it doing real-world chores. It’s lovely, and with these simulation games you can shrug off the chores that actually need doing and just emulate the same pleasure from the comfort of your chair.

That’s not entirely true however. Games like Eurotruck Simulator thrived despite their prosaic nature because they offered something people can’t experience without a large time and cost investment. House Flipper, another sim I enjoyed to a degree, sits on the other end of the spectrum. Cleaning windows and ridding of rubbish is something we all do (or we say we do to others to pretend we’re productive members of society), and like Eurotruck Simulator, it aims to relax and stimulate the player with simple, pleasing mechanics.

PC Building Simulator, then, sits somewhere in the middle of the spectrum. Ignoring the cost of parts, PC building isn’t a task that requires deep knowledge, time or skill to carry out. Snap that piece here, plop that there, screw that in here etc. It’s not very involved, despite what it might look like to outsiders, and PC Building Simulator takes that idea and runs with it much like House Flipper. If you have never in your whole life cleaned a floor before, it’s not actually as easy as pointing a broom towards a messy area and hey presto you’re done. It’s simple, but not that effortless. PC Building Simulator utilises the same, low effort style of gameplay. Hold your mouse button and the screw binds the GPU to the case, or cleans the case with compressed air, or attaches the CPU heatsink to the CPU etc. It’s perhaps all these games’ biggest flaw; the lack of interactibility. Building a PC in real life does involve the turning of the screwdriver, the lining up of the heatsink, the removal of the back case panel to install the motherboard. None of these actions are truly replicated in PC Building Simulator, for whatever reason. The end result is a very simple game that hopes to keep you hooked with that aforementioned cathartic satisfaction.

And it did for me. But it might not for you. Judging these games’ quality always feels like an internal battle. I know the gameplay is paper thin, so why in all fucks am I enjoying it so much? I spent over 6 hours a few days ago playing this game, and once I got into bed I felt deflated, utterly ashamed by how much time I’d pumped into a game with embarrassingly simple mechanics and no real payoff. I didn’t get the lifelong memory of an intricate narrative, or the immense wonder of complex, tight gameplay mechanics. I got 5000 imaginary bucks and a 4 star rating of my fake business. But I can’t deny at the time I was completely serene. Tranquil. Loving life. It’s a hard nut to crack, the simulator phenomenon that is, because they are low quality in many regards, but can you really slam something that brings so much bliss?

Of course you can. Many people vehemently  hate these games and I understand why. On the business side, PC Building Simulator doesn’t do much in the way of balancing the shallow assembly mechanics. Your business, owned by your uncle, Tim, starts in ruins and it’s your job to rebuild its reputation and earn as much money as possible. It’s fine. It serves its purpose, and maybe by being so simple it allowed me to enjoy it more, but at the same time I do wish it was deeper, perhaps then it would reach a wider audience who yearn for more complexity. Jobs come through via email and seem selected at random, taking into account your reputation and skill, but mostly follow pretty bland formulas of “hello, my pc no work, halp!”. Some jobs detail the supposed issue with the PC, some don’t and it’s your job to dissect the machine and discover its means of death, but in the end they play out the same. Once the issue is identified, you order the parts and fix the machine. There isn’t much room for creativity, much like a real repair shop. The customer often states what they want and you do as such. Some customers commission a new rig, and there you can explore a bit, choosing which parts will fit into their budget and needs, but by and large, objectives are fairly linear.

Occasionally however, you get a pre-written job, a job with backstory and much to my surprise these jobs are superbly composed. Characters like “oliolioli” and “Bruce Van Cleef” detail their woes in humorous and “articulate” ways, the former an aspiring professional gamer who explains his situation as if it were an actual email from a 15 year old boy with a harshly disapproving mother. Van Cleef, a ponce in every regard, uses words far beyond my vocabulary to issue waves of invective against technology as he enlightens us on how the art of pen and paper is being destroyed by “convenience”. These emails ripped me straight out of the happy little torpor the game had put me in and made me wish every job had these quaint storylines behind them. Impractical of course, given the game’s interminable nature, but I do wish they weren’t as uncommon as they are.

The game has other less integral elements tacked on too, most of them don’t feel fleshed out enough to really care about. For one, there is a used market, “PC Bay”, a site which sells used parts and broken rigs which you can choose to purchase to use for other means or to fix and flip later on. I never felt particularly compelled to use second hand parts though, partly because the majority of clients demand you don’t use them, but also because the parts offered through PC Bay are small in variety and sometimes take weeks to ship to you. It’s worth noting the market place you buy new parts also has shipping times, but it’s largely a waste of time and eventually feels like an empty choice. You’re given 3 options, regular 3 – 5 working day shipping, next day shipping for a tiny premium and same day delivery for a less-tiny-but-still-small premium. It got to the point in the game where I would accept contracts, diagnose the problem on the day and just buy the parts when I needed them with same day shipping. In summary, the game’s economy isn’t very well balanced, not on normal difficulty anyway, and it kind of ruins some of the potential these other mechanics offer.

Some added details do work really well in forging this simulation though. Diagnosing PC’s sometimes requires use of software like “3DMark” and “CanIRunIt” which adds a layer of depth both thematically and mechanically. Some customers also ask for cosmetic work like cabling and colour variants, some also specifying brands they prefer like MSI and Gigabyte. And yes, I do mean MSI and Gigabyte, and 3DMark for that matter too. PC Building Simulator has licences, a big handful in fact which it proudly displays in the opening splash screen, and it all builds a convincing illusion.

And that’s what simulation games are all about, the illusion of productivity. I could order parts in real life, spend thousands of pounds getting them to my door, wait weeks for them to arrive and build it myself, but in the same time frame I could build hundreds of PC’s in a game using all the same branded parts I was going to use anyway. Of course you give up that deep tactility the real world activity offers, and instead you’re given nothing more than clicking and holding, but it’s an illusion. And I guess it tricked me. It tricked me into thinking it was a good game. Does that make it a good game? Maybe. Maybe not. Maybe it doesn’t matter. Maybe I really should do some cleaning now…