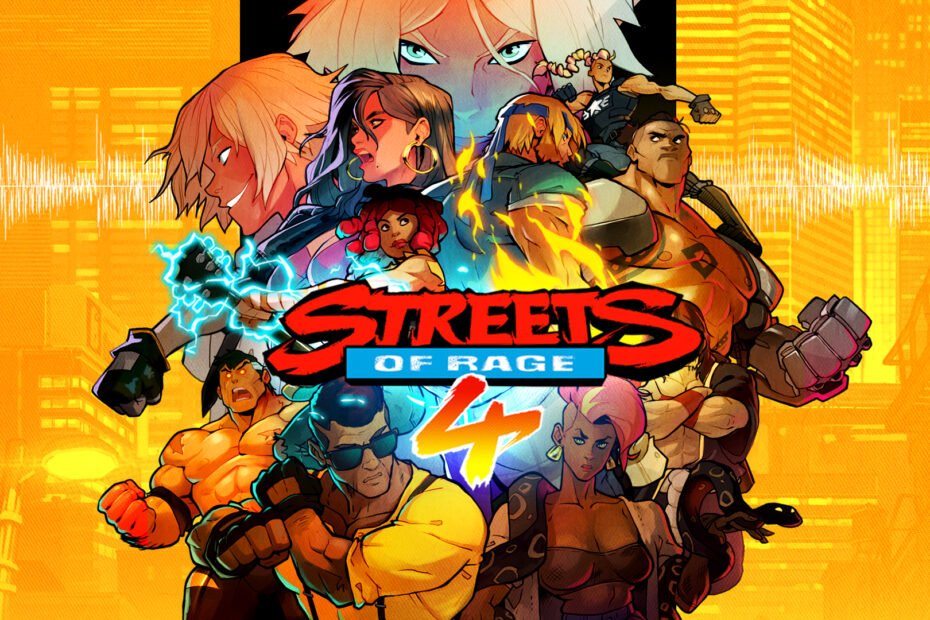 I’m a fan of plenty of genres, and like anything in life, their popularity and quality comes in cycles. First person shooters for example have been popular since their inception, but a notable sub-genre that remains rooted in old school design (think DOOM, Blood or more recent releases like DUSK) stagnated hard during the mid 2000’s and only recently saw a resurgence. “Beat ‘em ups” as they’re commonly known unfortunately haven’t seen that upturn in traffic and notable attempts to reinvigorate the genre often come off as unsophisticated and banal fan service. In fact I don’t think I’d be alone in saying my interest in the genre hasn’t been piqued by anything outside of the 90’s (with the notable exception being the excellent Streets of Rage remakes). The “why” isn’t a hard question to answer. The advent of 3D technology alongside the growing expectations from the general gaming community for added value, be it game length or mechanics, has made the beat ‘em up genre obsolete to many, diverging into genres such as spectacle fighters (Devil May Cry, Bayonetta) and side scrolling hybrids (Castle Crashers, Metroidvania’s as a whole). Streets of Rage 4 is by many accords a stringent amalgamation of the genre’s highlights in the 90’s, only through technical tweaks and presentational flair does it forge its own name and it’s an absolutely joyous return to a world I’ve long missed.

Set 10 years after the events of Streets of Rage 3 (and released a mere 25 years later too), Wood Oak City has left an era of peace, falling into dismay after the Y Syndicate cause chaos attempting to take control over the populous in a mirroring of their fathers’ aspirations in the past games. Much of the cast are returning characters, both good guys and baddies alike, all of which receive the 2020 treatment with fresh designs and updated movesets.

Streets of Rage 4 is a faithful addition to the series, and with the franchise being rooted in such unadulterated simplicity, the game was fighting the odds to prevail in a genre that failed to adapt to the evolving technology described before. Old school design meets modern day sensibilities, sticking to the largely 2 button moveset only implemented in such a polished, user friendly fashion. The most conspicuous tweak to gameplay is how the special attack seems to take directly from Bloodborne’s “Regain” mechanic. In prior games, your special attack would drain health and in turn lets off a strong strike. The obvious downside here is constantly having to monitor your health and deciding when to use it, and in my case that “when” was never, always hesitant that I’d misjudged the situation and didn’t really need to use my special. The Regain-style mechanic let me be far more creative than I ever had been in a Streets of Rage game, often understanding that there is a clear time and place for a special attack and while I may misjudge that time and place, I don’t feel as bad since the penalty for failure is far less severe. In some sense, this mechanic adds complexity to a game that actually feels so simple, as most combat encounters will consist of scrumptious, delicious button mashing. The special attack feeds so well into the basic attack it all feels like one, natural attack. Of course genre staples like disposable weapons and grabs are also present here, and while the former never feel quite as good as assailing enemies with standard attacks, grabs are so integrated into the combat loops they made an entire character revolve around them. Lobbing puny enemies into fire-breathing fat bastards and then suplexing said fat bastards into the ground, launching his accomplices into the air is some of the most satisfying combat I’ve experienced in years. The most surprising thing about this is how it just makes you forget how rudimentary it all is. The feedback present in every kick, punch and throw is tactile and elicits a presence in the real world very few games can hope to attain.

I think where you start to ask questions about the combat system is when you factor in how much you can get out of the game. The main campaign in Streets of Rage 4 lasts only a few hours in my experience on normal difficulty. Despite the palpable difficulty at play even on the average setting, I only died once or twice hitting a game over screen (since you have 3 lives to start with per level). For a fan of the series and one that fell head over heels with the raw gameplay, replaying the main story a few times was instinctual, this time running through the game with a selection of the unlockable characters. My first playthrough was with Axel, a heavy hitter with limited mobility. Then I played with my favourite, Blaze, who plays as the polar opposite to Axel. Another completion came with Adam, a healthy mix of the two, and a few close completions with the rest of the cast, notably Cherry and Floyd who are unlocked from the offset. The real surprise here was just how varied and unique each playthrough felt. This can most starkly be described through a character like Blaze or Cherry juxtaposed with Floyd, a newcomer who’s entire combat conceit revolves around grabs. The former two are swift killers that excel at solo encounters, whereas Floyd is as close to a tank as a human can come, thriving on the thrill of the gang fight, chaining grabs together to crush enemies’ heads together like coconuts. I can see some being underwhelmed by the game’s length and lack of replayability, but I’d argue the sheer diversity in how these characters play was enough to squeeze over 10 hours of game time for me, a formidable playtime for a game in a genre known for its brevity. There are a few other modes to try also. Battle mode makes a return, and like the battle mode in other games I had absolutely zero interest in it at all – although seeing Street Fighter legend Justin Wong execute insane combos in the mode only strengthened my love for the game’s robust combat. Boss Rush mode also makes an appearance, which I tried a few times and set it down, exclaiming it was definitely not for me but handles well. Part of the cathartic release of a beat ‘em up for me is the Bruce Lee roleplay; the feeling of disposing 10 guys at once displaying extreme brawn and fortitude, something Boss Rush just isn’t about. Something the main campaign is exactly about.

Utilising the widely applauded Streets of Fury engine, I’d imagine the quality of the gameplay was never really in doubt to die hard fans of the genre. As someone not so ingrained in the community, I was gleeful it turned out the way it did. The more contentious aspect of the game turns out to be the presentation. I think this is where a large part of the Streets of Rage modernisation materialises, looking far cleaner and shinier than any game before it, yet still sticking to the neon and gritty aesthetic the series is known for. I love it, top to bottom, major overhauls to small character details. Streets of Rage feels like a perfectly faithful, contemporary fan game, given credence by developer LizardCube’s homespun background. Lighting is used especially well here, shadows and highlights give off a real sense of depth in a world that is flat. Character designs are bespoke and easily identifiable, untainted by the potential effects a reimagining can have. In other words, despite Streets of Rage 4’s makeover, the fundamentals that make the bold and brash world of Wood Oak City live and breathe as if they never died. On the audio side, series veterans such as Yuzo Koshiro and Motohiro Kawashima return producing both nostalgic remixes of series classics and pitch perfectly-fitting new tracks alike. Koshiro’s involvement is particularly powerful given it came about because of demand from fans. The smooth sounds of Streets of Rage are perhaps even bigger than the game itself. The argument of whether Streets of Rage would be as good of a series as it is without the soundtrack is quite honestly a fair one, in the same vein Hotline Miami wouldn’t be the same without its respective auditory stimulant. Thankfully, main composer Olivier Derivier alongside the contributions of the aforementioned legends uphold the standards set 25 years ago. Perfection is struck through each and every track, encapsulating the tone of the original games ever so well while still remaining wholly unique. In fact, every track matches the individual levels so well, it rivals Darren Korb’s masterful work on Pyre, a game that managed to link sound to characters in a way very few games do. Streaming platforms rarely have stock of video game soundtracks, but it does have this one. Listening to it outside the game only reinforced my belief as the ease I was able to mentally step into each level facilitated by the sounds of the soundtrack was frankly astounding.

While I do wish there was just more of the game, Streets of Rage 4’s fleeting nature allows it to capture the good parts of the game in such a condensed fashion that the minor negatives it does have are hard to recall. While combat feels diverse and fresh, the weapons in the game still feel stuck in the 90’s, which is a shame given how some characters suffer with certain attributes. Characters like Floyd and Axel for example lack so much mobility that some bosses start to lean into plain unfair, notable The Twins and Mr Y’s fights. I feel that some deeper weapon choices in these boss fights could have mitigated some of the problems they have with their lack of nimbleness, along with simply making combat even more enjoyable. On the topic of characters, the game also sticks a whole wad of fan service into the game in the form of unlockable classic characters. They’re cute and fun for a few minutes, but I think sticking so rigidly to their old designs only highlighted how out of place they are in this game, even slower and less fluid than the slowest of new characters. At the end of the day, I’d rather have a few well designed classic characters than every classic character sloppily jammed in. Admittedly there are a few stinker sections in the main campaign like the dojo fight that flings the perpetually irritating knife sprinting plebs at you or a fight later on that has fortified policeman form a wall in front of a new projectile based enemy, allowing them to toss acid and stuns at you at a rapid pace, but these are mere portions of levels, ephemeral wedgies that leave a sore burn, but is quickly dashed minutes later by pure arse-kicking, elating combat.

Twice SEGA have struck gold having fans under their employ, Sonic Mania first, now Streets of Rage 4. Who wants to give Outrun a crack?