Stubbs the Zombie in Rebel Without a Pulse – Review 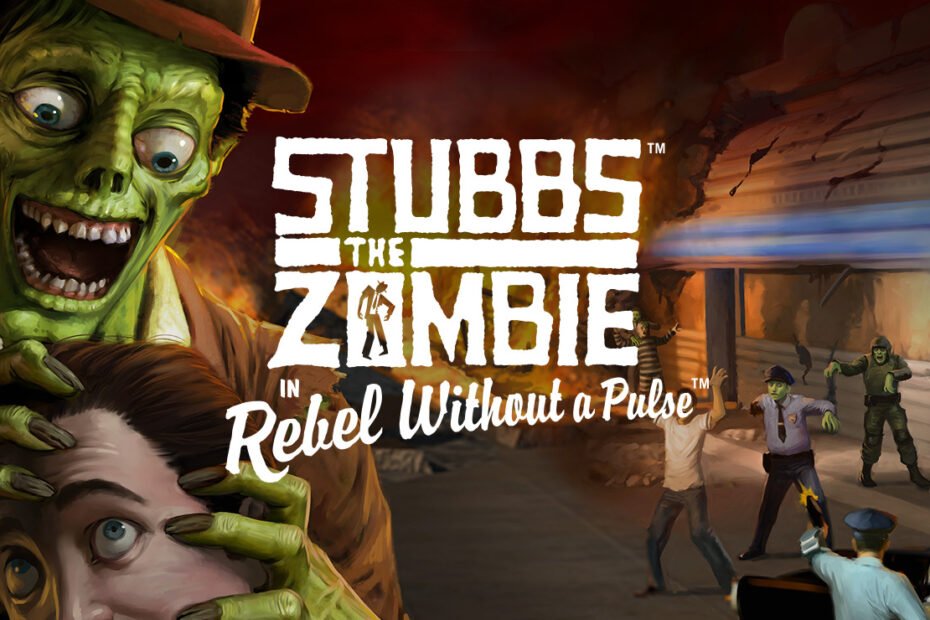 Is there a song out there more evocative of an era than the doo wop classic “Lollipop”? Not even just its era, any era? Amerie’s “1 Thing” brings back all my 2000’s nostalgia, A-ha’s “Take On Me” is the 80’s in a nutshell, but nothing comes close to the initial few claps of the “Lollipop” intro, and as the first utterances of the one-word chorus race through your lug holes, it truly does make you feel like some guy – called “Ted” probably – sitting in a diner sipping on some ‘Merican coffee. It’s no wonder, then, that so many TV shows, movies and video games use the song so readily as a quick and easy means of setting the scene. Any of the numerous versions will do, Ben Kweller’s cover is used in the topic of discussion today, Stubbs the Zombie in Rebel Without a Pulse, more specifically the very recent remaster handled by Aspyr which as I quickly discovered is, for all intents and purposes, just the original game developed by Wideload Games back in 2005.

I’m fine with this. I play video games in their original condition whenever possible anyway, at least if it’s my first time playing it. There’s something fulfilling about experiencing and examining a game in the state it first released, comparing that embryonic entry to its peers and how it stacks up by today’s standards. Aspyr did make most of the textures HD in this release (not the HUD, strangely), and they also removed some licenced music because music licencing absolutely sucks balls, but this is Stubbs the Zombie as we all knew and loved, although I can’t say that nostalgic fondness carries any weight now I’ve played it today.

Stubbs the Zombie is quite a unique experience in a way. By 2005 standards, where zombies hadn’t hit the cultural oversaturation they did a decade later, a game centered on being the zombie itself was fresh and lively, despite the undead, eponymous Stubbs you control. Moreover, even in today’s climate, a game which has you play the villain with the aim of controlling a horde of baddies in an action-y fashion is still fairly idiosyncratic. Games like Overlord and Brutal Legend come to mind when thinking about this style of play and both are fairly contentious titles, both feeling somewhat shallow due to having to essentially juggle two different genres, although Stubbs the Zombie proves even more shallow than the grave you dig out of in the game’s introduction.

Describing Stubbs the Zombie’s plot is difficult as it doesn’t really have one. The game severely lacks any driving force at all, and as we’ll discuss shortly the same goes for simple mission objectives too. Stubbs rises from the dead, for some reason, eats a bunch of brains, because zombie of course, and then I really don’t know what life course he is on. You find a Marilyn Monroe type character after the tutorial, and it’s implied Stubbs finds her so piff he’ll destroy cities to attain her love, so I presume that’s our goal, although throughout my couple of hours playthrough she is only seen in that fledgling cutscene.

Stubbs the Zombie hopes you like the concept of “being a zombie”, because the gameplay is just as braindead as I imagine being a zombie really is. You have a primary swipe for some quick damage, and on enemies with low enough health, you have an “eat brains” button, an action which gets a lot of use. It’s no surprise though, as the idea is neat. Eat brains to turn people into zombies. As their slightly less brainless leader, you can march them through the city and wreak havoc upon humanity, whereby they’ll attack enemies alongside you and, with any luck, further increase the size of your army. 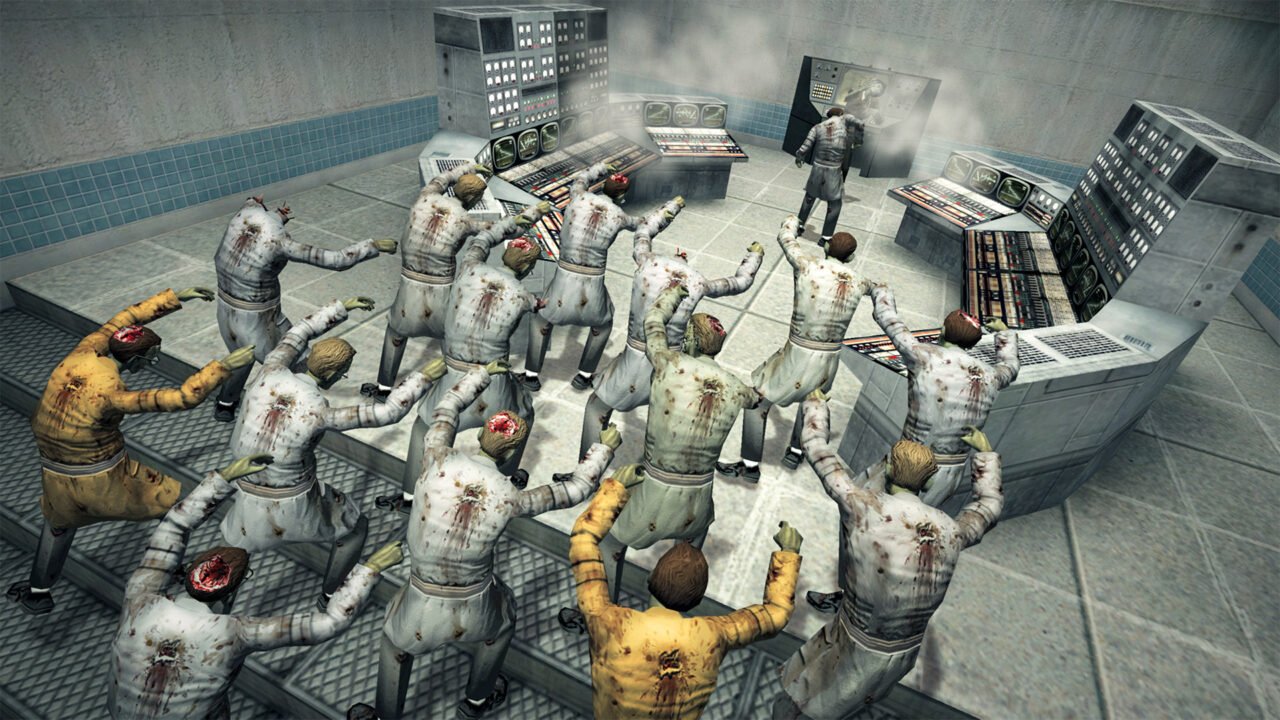 Plenty of issues exist here, which is a shame as this is clearly a mechanic the developers wanted and (now Aspyr) still wants people to be aware of as a unique selling point. Looking back, I’d definitely say it was the most memorable part about the game’s moment to moment gameplay. Unfortunately, to be blunt, it’s just oversimplified to the point of tedium. Pressing Y ad infinitum can only be so fun. Along with the slow animation which accompanies the deed, the bodies you vivify behold some woefully dated artificial intelligence. You only have two ways to control your minions: call them to follow you, and push individual zombies in a direction. Both commands are utterly useless. The zombies will loosely follow you anyway, and when an enemy is seen they will make a beeline towards them, like zombies do, therefore both actions serve no real purpose. As a result, the strategy portion of the game feels underdeveloped and automated. You don’t really control an army of the dead as much as you influence how big that army is, and even then you’re limited in that sense as the enemy forces become stronger whilst your bumbling buddies remain squishy, nucleus-impaired sacks of shit.

This is working under the assumption you can build an army to begin with. Once you meet the militia an hour in, they slaughter zombies quickly and with ease, meaning you’re likely going to be a lone wolf anyway, which puts more focus on the game’s barebones combat. There are, in theory, several different attacks, but all but one are contained behind damage-based recharge meters, meaning if you want to use them, you need to run up to people and slash them with your primary attack first, which of course therefore means you take loads of damage in your attempt. Making things worse, your primary attack is anaemic, sloppy and unreliable in how much damage it deals. To actually get the recharge for your abilities, you need to eat enemy brains, and sometimes I’ve gone up to an enemy, wailed on them for a couple of seconds and accidentally killed them in the process, therefore gaining no recharge.

Is it worth it, taking loads of damage in the name of the glorious abilities? No. You have a toot attack, which stuns some enemies close by and is just about as funny as a cheap fart gag can be. Effective, but limited due to its range. You also have two attacks which are essentially the same, one where you toss an internal organ at people mimicking a grenade and another where you bowl your head like a bowling ball whereby it explodes like… a grenade. They’re not fun to use, quite frankly, and to make things worse, killing people with them only means you reduce how many enemies there are for you to feed on to recharge your abilities. There is one more move, “hand control”, a quick recharge ability which has you rip your arm off and control it with full sentience, looking for a living body to control. It’s neat, but again highlights the weak combat, as controlling a police officer or hillbilly equipped with a gun controls like a bad 2005 third person shooter. Weird that, eh? 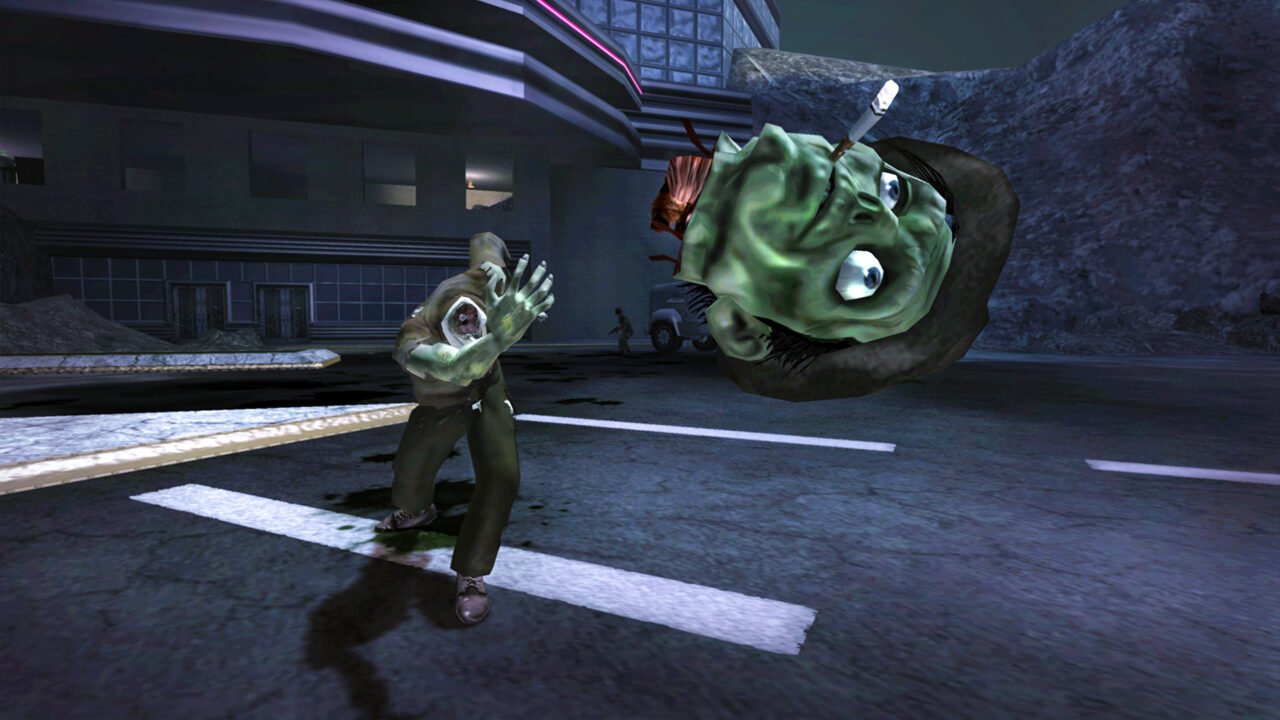 Shortcomings like these make it sound like the game would be impossibly hard, but the difficulty is actually quite capricious. The first hour is painfully boring, as the hardest enemy you face are officers in riot gear, sturdy but deal next to no damage. Once the militia rear their heads through, the difficulty spikes considerably from room to room, sometimes slumping back into tedium and other times placing you against 10 riflemen with none of your undead cohorts to back you up. The damage you take is inconsistent too, especially against the hicks as their high powered snipers and double barreled shotguns can feel like both peashooters and bazookas. It’s both jarring and frustrating, and ultimately reinforces how underdeveloped the core mechanics are.

As I was playing the game, I was in disbelief at how bad it truly was. Could my semi-developed, FIFA-addicted brain really have internally valued this game as something with so much worth , something years later I would constantly bring up as an example of a game that “needed” a version for modern platforms, “le hidden gem” if you will? If I could go back in time with this knowledge, I would force my younger self to apologise for this disgraceful view which only served to instill a sense of nostalgia which, yet again, disappoints me. I’d also demonstrate how playing Overwatch until 6AM before an 8AM A-Level exam isn’t wise. Anyway…

There is something captivating about Stubbs the Zombie though, and I think it has to be that 1950’s charm. While some tracks were removed in the re-release process, iconic tracks like “Mr. Sandman” and the already mentioned “Lollipop” are here – lesser known covers of course but still good in their own right – although they’re incredibly sporadic and used rarely. A film grain effect overlays everything, along with some filters depending on who you are controlling are applied too, which would usually be a root of annoyance, but here feel fitting and in keeping with the style.

Again though, it just further exemplifies the related issues the game has. I really like the renditions of these classic songs and what they bring to the game’s atmosphere, but they’re barely used. In fact, audio in a general sense is sorely missing as most of the game contains unsettling degrees of dead air, only penetrated by footsteps and brain-munching. This isn’t isolated to music either, as even sound effects which blatantly should exist, don’t! You drive a tractor, for some reason, a couple of hours in and it makes no noise whatsoever. Awkward is one word to describe it, and I hope “indicative of a lack of budget or time” is the reason behind it rather than intentional laziness.

According to numerous sources, the game totals in a neat 6 to 8 hours, but so much of that time is artificially inflated by the aforementioned difficulty spikes, dragging animations and obtusely open level design. I never picked up on this when I was younger, but this game feels dead, and not in the thematic sense. Levels stretch 3 or 4 times the size they need to be for no good reason. The game doesn’t contain any collectibles of any kind, nor any side objectives, so you’re left with this big, empty toy box which feels designed for a completely different game. Perhaps one that doubled down on the strategy side to the game, building vaster, more complex armies, fighting more intelligent enemy forces. As is it, the bloated map just increases the length of time it takes you to get to your one, solitary objective.

Of which, might I add, is rarely even conveyed to you. Like I said before, the grander mission statement Stubbs operates by is tenuous anyway, but the game makes no attempt to explain what you are doing from level to level either. Seldom do cutscenes communicate a threat to deal with, and the game doesn’t even stretch to a simple text popup to explain where you’re stumbling to next. You just kind of shuffle in a direction and hope a door or cutscene appears. In a way, the game truly does authentically make you feel like a lethargic, dopey zombie.

I keep going back to games of my childhood and leaving sorely struck by the effects nostalgia has on the mind. Oblivion’s rubbish levelling system escaped me as a kid, as did Grabbed by the Ghoulies’ tedious objectives and Bully’s sloppy storytelling, but all of these games still carry worth through other means. Stubbs the Zombie is, to my chagrin, so deeply flawed it fails to be worth more than a 15 minute affair with nostalgia. They don’t make them like they used to do, and I think I’m fine with that.